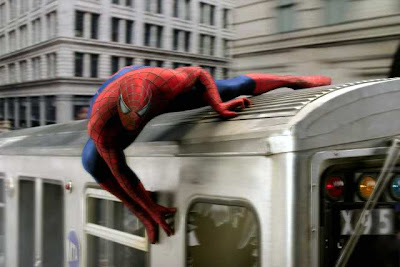 Because this is one of the worst decisions they've ever made!

Letting go of Sam Raimi and Tobey Maguire, then returning to "Peter's roots," does not sound like a sound direction for the SPIDER-MAN movie franchise.

Who gives a flying fuck about Peter's roots? We already got the origin story in the first SPIDER-MAN movie.

Going SMALLVILLE all over Spider-Man sounds like a snore. We don't need TWILIGHT teen drama in our Spider-Man flicks.

This boldly stupid move also robs us of our chance to see Dr. Curt Connors become the Lizard once and for fucking all!!! Sam Raimi was no doubt warming up to that, they should've let him play it out. And what about his take on Mysterio? Sony, you crazy! You crazy, Sony!

Tobey Maguire was the heart and soul of those Spider-Man movies. Good luck finding an actor capable enough to tapping that mix of heroics and vulnerability.

And Sam Raimi is just about the only director out there who really gets the comic book aesthetic and can translate it on the screen. Good luck finding another director who has his chops and his savvy. And good luck to Sony, now officially the NBC of movie studios, whose theme song might go something like this: "Spider-Flop, Spider-Flop!"

But on the plus side, now maybe Sam Raimi can go back to making more great Sam Raimi flicks. Maybe even ARMY OF DARKNESS 2 (a.k.a. EVIL DEAD 4). Tobey Maguire can play in movies that might get him an Oscar.

Question: Who would be nuts enough to throw away nearly $1 billion box office gross per movie down the toilet? Answer: Sony.