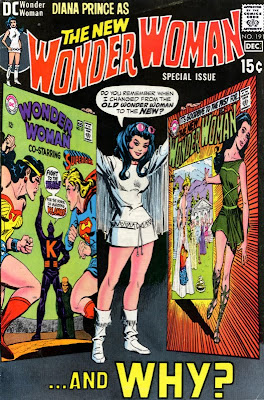 Wouldja believe....Diana Prince once emulated Diana Rigg?
Let's face it....I was never much of a DC fan growing up (let alone a book such as WONDER WOMAN) but these days, between some of my favorite books (UNKNOWN SOLDIER, PHANTOM STRANGER, the DC horror anthologies) and my never-ending quest for Frank Robbins and Gerry Talaoc material, I've grown to really appreciate Silver and Bronze Age DC Comics that I slept on during my formative years. It's been fun re-discovering DC Comics of yore, an acquired taste for me compared to the very accessible, "grounded in reality" (by comparison) Marvel Comics that Stan Lee brilliantly sold readers on.
Before I was born, the mighty Mike Sekowsky drew a run of late 1960s WONDER WOMAN comics (written by Denny O'Neil) that I'm currently reading and they're a lot of fun, mainly because how blantantly the adventures of Diana Prince and blind Chinese mentor I. Ching are riffing off of the Diana Rigg/Emma Peel THE AVENGERS. They've comically dispensed with Wonder Woman's corny costume for some Mod Carnaby Street haute couture and espionage antics. It's not really a Wonder Woman book (and I understand this entire take was an embarrassment and a poor seller at the time) but I'm diggin' it, daddy-o!
Side by side, I'm more than halfway through TRUE GRIT by Charles Portis, the book that inspired both the John Wayne and the Coen Bros. adaptations (neither movie I have seen). It's a pretty interesting Western, written in the voice of a 14-year-old female protagonist....and while I keep hearing the TRUE GRIT movie by the Coen Bros. is borderline interesting/borderline boring, I will rent it when it comes to DVD. When all is said and done, I found it hilarious that TRUE GRIT, with (I think) five Academy Awards nominations, did not win one award...but THE WOLF-MAN won an Oscar! Cosmic jokes never go out of style!
Posted by Greenblatt the Great! at 10:35 AM