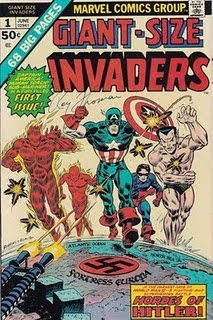 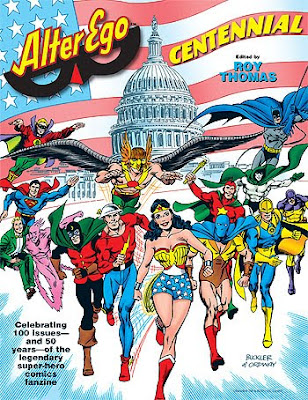 Fanzines are fun when they're done right...and no one does them righter than TwoMorrows.com, in my opinionitis!
Just got through reading the big, fat commemorative ALTER EGO #100. The ultimate fanzine, Roy Thomas's famed ALTER EGO (vol. 3, I believe...), an offshoot of one of the original fanzines, just reached its 100th issue.
I was invited to write a piece up for it. I spent my space waxing about THE INVADERS, written by Thomas and drawn masterfully by quasi-cartoony artist extraordinaire Frank Robbins (not to slight inker Frank Springer and artist Lee Elias, who also brought a lot of game to INVADERS).
Robbins went against the grain of the Marvel House style, bringing his quirky, Milton Caniff-inspired art-style to superhero comics such as INVADERS and HUMAN FLY (which I wrote about in my first BACK ISSUE! magazine piece for BI #20 in Jan. 2007). It worked...for half the readers..the other half despised him because he was not Jack Kirby. Robbins was a polarizing figure, and he's finally getting a well-deserved cult going on online from a lot of the kids who hated him at the time but can not seem to shake the impression his art had on them. It took him a few decades but Robbins won 'em over at last!!
I'll be writing up a piece on another Robbins thrill ride, Marvel's short-lived MAN FROM ATLANTIS, in an upcoming BACK ISSUE! ish next year.
Back to ALTER EGO#100. The cover is above and you can get this issue directly from TwoMorrows at a discount price right here!
Posted by Greenblatt the Great! at 10:30 AM