This is a Rogue's world....But it wouldn't be nothin', nothin'...without readers and reviews! 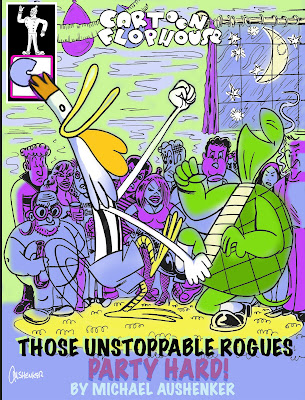 THE COMICS JOURNAL critic Rob Clough just posted a gag cartoon book round-up at High-Low, which includes a pretty nifty review of my latest compilation, THOSE UNSTOPPABLE ROGUES PARTY HARD! Check out the review, in which he digs the Rogues even more than Greenblatt the Great!
Hats off to Rob, who regularly posts precision reviews on comics and graphic novels on his High-Low blog. My thanks to Rob for reviewing THOSE UNSTOPPABLE ROGUES PARTY HARD! and for continuing to obsess over humor comics in these days of cynical rehashes, reboots and renumberings. (Thankfully, Clucky and Brett make for lousy superheroes so they don't fall into all that soup...) 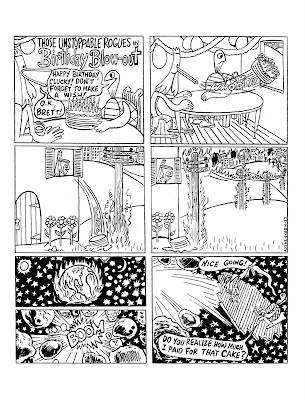 By coincidence, I happen to be planning to begin work on two ROGUES follow-up books (not part of a trilogy, just three books total featuring Clucky and Brett) later this year. So good news for ROGUES fans!
And all you Greenie heads, I'm not done yet with Greenblatt the Great! just yet. The GTG! ultimate trade paperback collection, HISTORY WILL BE SERVED!, debuts at the Alternative Press Expo (APE) 2011 in October. Look for all the old Greenblatt strips plus some new strips––all in one hefty, handy trade paperback edition.
THOSE UNSTOPPABLE ROGUES PARTY HARD! will be available at the Cartoon Flophouse table at San Diego Comic-Con, July 20-24. Drop by, drop in, drop out, tune up!
Posted by Greenblatt the Great! at 8:33 AM