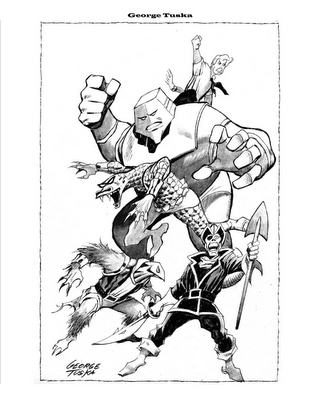 Over the years, I was delighted to have some working legends of the comics field draw versions of my characters. The late great GEORGE TUSKA interpreted my monster hero characters the Urban Golem (and the Orthodox Jewish dwarf sidekick who summons him back to life), Capital Punishment (a DMX-style hardcore rapper-turned-crocodile creature, center), the Gobble (were-turkey creature, bottom left), and Ghost Pirate in this MONSTERS-4-JUSTICE pinup. 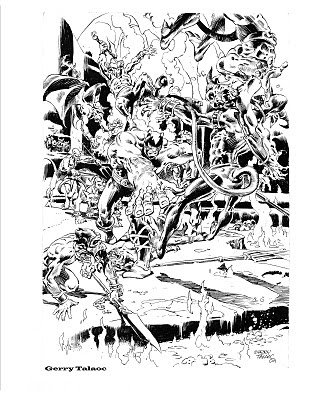 The great, underrated GERRY TALAOC drew the above pinup for my planned story EL GATO, CRIME MANGLER VS. SATAN'S ARMY. Gerry is one of the great artists of the Filipino Invasion. I love Gerry's work, particularly his UNKNOWN SOLDIER comics. 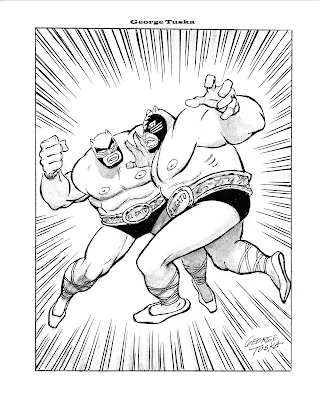 George Tuska also did this El Gato vs. El Gato piece for my planned EL GATO VS. THE TIME KILLERS story. 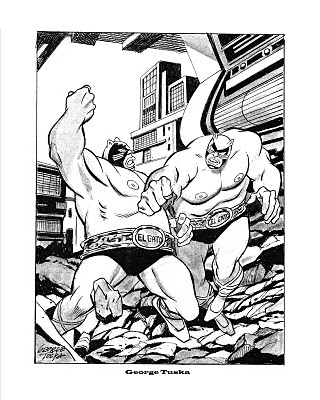 Another George Tuska interpretation for my planned time-travel story EL GATO VS. THE TIME KILLERS, this time it's a final showdown in a futuristic city. 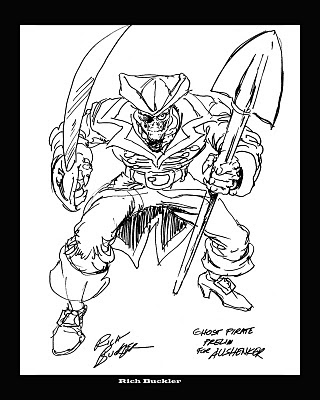 Rich Buckler also took a crack at the Ghost Pirate in this nice loose sketch. Shades of Deathlok the Demolisher for sure! 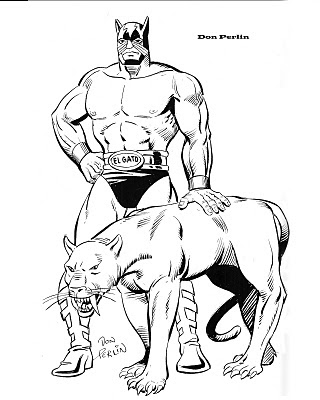 Don Perlin's superhero take on El Gato, Crime Mangler (with Zabu the sabretooth tiger from Ka-Zar comics) was originally published in THE NINE LOVES OF EL GATO, CRIME MANGLER (2003).
The Golden Age (1940s-50s) invented and lay the foundation for great American superhero comics....the Silver Age (1960s) reinvented them and made them more sophisticated and "grounded in reality"...but I'll always have a sweet tooth for the Bronze Age (1970s), the pulpier era when the comic book companies let their hair down and the ethnic heroes, monster heroes, and trashy-fun "non-essential" B-books flooded the stands. Fun stuff!
Posted by Greenblatt the Great! at 6:59 PM

Thank you so much for sharing these true Treasures, Mike! Dude... I'm almost speechless looking at these pieces! Beautiful, Man!