"The Muppets," "The Smurfs," "The Three Stooges"


I'm going to freely express my thoughts on "The Smurfs," "The Three Stooges," and "The Muppets" because if I don't, the terrorists win...and that's not happening on my watch!

Which in this three-way wins as Best Family-Friendly Film? Read on and see....

Weird coincidental thread between all three: Sofia Vergara and AC/DC's "Back in Black" -- Two out of three of these films feature Sofia Vergara as the villain (essentially her same bitchy character) and the one movie that doesn't ("Muppets") features the kid who plays her son Manny on "Modern Family." So Sofia Vergara is well repped here. Her agent must be on drugs for pushing her to do these family flicks.

It's totally charming and quaint that a group once associated for Satanism and evil now routinely has their music in family-friendly crowd pleasers ("Smurfs," "Muppets," and don't forget "Shoot to Thrill" in "Iron Man 2"). I love the song "Back in Black" so I'm not going to complain, although "The Smurfs" did a good job of mangling it! 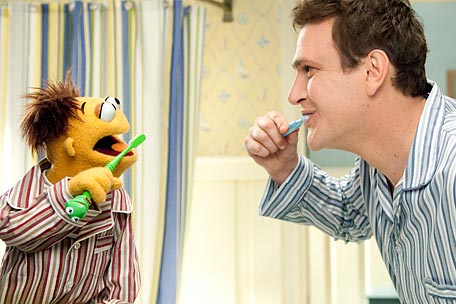 "Smurfs" is not the disaster critics made it out to be. If you can stomach the "Alvin & the Chipmunks" movies, this is very solid among those. Neil Patrick Harris is always fun, Hank Azaria is good as Gargamel, and Azriel is crazy. I was never much of a Smurfs fan but this lost in New York tale hits all the Smurfs sweet spot. The Scottish Smurf is out of nowhere though and do we really need that guy? (Kilty Smurf? Plaid Skirt Smurf? I don't remember his name.) Wolf Blitzer resembles Papa Smurf more than ever (except for the wise words part). That old dishrag Joan Rivers pops up in a cameo. "Smurfs" gets bonus points for throwing on Run-DMC's "Walk This Way" on the soundtrack and making an entire scene out of it! Yes, siirrrrrrrrrrrrrr!

"Three Stooges" was actually my least favorite of the three but still kinda fun. Although the impersonations were actually good enough, this movie had nowhere to go with the hack "save the orphanage" plot. It was enjoyable on some level but not as funny as it shoulda been. And definitely didn't seem very Farrelly in humor. I recently saw "Heartbreak Kid" with Ben Stiller and Danny McBride and that was better. But you can see the love and I liked that it was broken up into episodes. I hope the sequel does better.

"The Muppets" had a hack "save the theater" plot but it worked better here. I had heard very mixed reviews of this film, but I was pleasantly surprised by how charming and really funny in places this movie is..and how much it captures the Jim Henson vibe. I loved the montage and this movie had the BEST cover of Cee-Lo Green's "F You" song ever -- very clever and funny how they got away with that one. The musical numbers are fun. It's a very self-aware film but where it would be annoying in another film, it totally works here because the gags are very funny. Jason Segel is great in it and the screenplay he co-wrote oozes with wry humor and reverence for the original films. I think he nailed the right tone and the humor, and I would place this up there with "The Muppet Movie" and "Muppets Take Manhattan" so congratulations! I hope they make a sequel!

The winner: "The Muppets" movie by a long shot!

Runner up: "The Three Stooges"

The loser: The terrorists.

Posted by Greenblatt the Great! at 8:34 AM