SDCC 2013: TWO NEW BOOKS - "HISTORY WILL BE SERVED" and "THE NEW ADVENTURES OF THE HUMAN FLY" 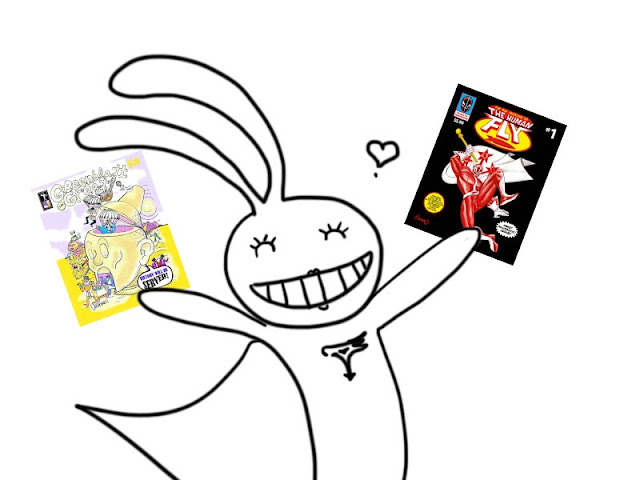 Make like Princess and pick up your copies of the complete GREENBLATT THE GREAT! collection HISTORY WILL BE SERVED! and THE NEW ADVENTURES OF THE HUMAN FLY ---both will be on sale at the CARTOON FLOPHOUSE booth, K-13, in the Small Press section at San Diego Comic-Con, beginning Wednesday night (July 17-21).

HISTORY WILL BE SERVED! contains every Greenblatt the Great! strip I've ever done, from the classic first 30 chapters to Greenblatt the Great's run-in with John Dillinger and his tours of Hollywood and Pacific Palisades. You want humor comics? You can't do better than this thick trade paperback. And at SDCC, I'll sign and doodle it up for ya!

THE NEW ADVENTURES OF THE HUMAN FLY is both homage and a revival of comics based on the real-life Canadian stuntman superhero originally published by Marvel Comics and drawn by Frank Robbins, Frank Springer and Lee Elias. This book, which I've edited, contains work by myself as well as Rafael Navarro ("Sonambulo," "Guns A Blazin'"), John Heebink ("Nick Fury, Agent of S.H.I.E.L.D."), Steven Butler ("Web of Spider-Man"), Gerry Talaoc ("The Unknown Soldier") and legendary letterer Janice Chiang (everything!). We also have contributions by the surviving original inkers and cover artists from the Marvel series - Bob Layton (the classic "Demon in a Bottle" storyline in "The Invincible Iron Man"),  Don Perlin ("Werewolf by Night," "Defenders"), Al Milgrom ("ROM: Spaceknight") and Steve Leialoha ("Fables"). It's off the hook! A party on paper!

Thank you, GC, for this lovely illustration!

Posted by Greenblatt the Great! at 9:15 AM

Trigger finger on posting- this is Richard Caldwell, who runs the Lottery Party and who has the over-sized Speedball essay in the new Ditkomania! richard@thelotteryparty.com