BACK ISSUE magazine #71 is out featuring my article on BROTHER VOODOO..SFX: Dum-Dum-DUM-DUM!

As my duties for TwoMorrows Publishing have shifted to associate editor for Comic Book Creator magazine, with #4 (Russ Heath cover story) imminent, this textual exploration of Marvel's Brother Voodoo (featuring co-creator, writer Len Wein) in issue #71 of BACK ISSUE magazine will most likely be my last article for BACK ISSUE. 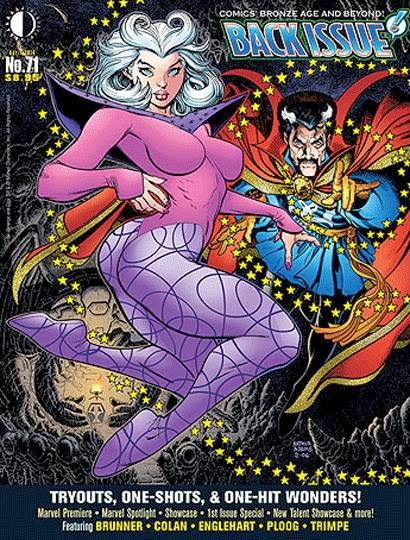 I'm not sure what editor Michael Eury's plans will be for issue #100, but I'd love to be a part of that big issue when it arrives if it fits his editorial plans. Michael Eury has led the magazine with a sure hand and a light touch that has made the mag a fun and informative read.

That aside, it's been a very fun ride, contributing articles on and off for more than 50 issues, beginning with my debut with an article on Bill Mantlo and Lee Elias/Frank Robbins' The Human Fly in BACK ISSUE #20 and continuing with articles on Son of Satan in BI#21, Captain America and Falcon in #22, a personal favorite of mine: a conversation about Deathlok the Demolisher with Rich Buckler in BI #25, and scores of other articles on everything from Mr. T in the comics to Spectacular Spider-Man and Marvel Team-Up.

Many thanks to Mike Eury for inviting me into the Back Issue fold in the months following the only time we've met in actual person: I believe it was San Diego Comic-Con 2005 following a TwoMorrows panel.

Posted by Greenblatt the Great! at 8:03 AM