FLASHBACK: My Interview with SAM RAIMI 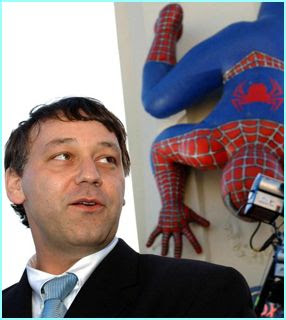 Back when I wrote for another paper, I out-scooped America by getting in this early interview with a favorite director of mine, SAM RAIMI, whose DARKMAN and ARMY OF DARKNESS were two of my favorites. He was still more or less a cult favorite, readying a little film called SPIDER-MAN I! Only back then, it was called SPIDER-MAN because there were no sequels yet!

As you can imagine, Sony was a little nervous, entrusting the keys to Marvel's flagship character to a director who had never had huge mainstream success (even if Raimi fans had already known for years that there was no director working in Hollywood who was better at understanding how to mix sincerity with camp and translate that comic-book aesthetic onto the silver screen). Even though this cover story feature ran in April, we did the interview in February 2002, while Mr. Raimi was in post- with the first SPIDER-MAN. And the interview went well... We spoke for an hour, and Sam Raimi lives up to his legend as just about the nicest--and wittiest--guy in Hollywood. What a delight, this was just about the highlight of my journalism career, circa 1997-2003. Our conversation went so swimmingly, Sony's PR people put a moratorium on talking to all press until he delivered the final movie.

Needless to say, my interview ultimately didn't do much damage to his film, one of the best superhero flicks ever made, as the final product went on to open with a ground-breaking 9-digit debut at the box office. Notice, by the way, that even this early on, Mr. Raimi had designs on Doc Ock for the sequel.

Anyway, the paper I wrote for was a local ethnic community paper, hence the Jewish angle. On the eve of the release of his return to comedy-horror, DRAG ME TO HELL, I thought I'd exhume this baby. And here it is....my pre-SPIDER-MAN interview with SAM RAIMI!

The Jewish roots of director Sam Raimi and "Spider-Man."

"Did you know that Peter Parker is Jewish?" director Sam Raimi asked The Journal, referring to Spider-Man's teenage alter ego.

Raimi was joking, of course, but the 42-year-old director behind Columbia's "Spider-Man" motion picture (out May 3, starring Tobey Maguire and Willem Dafoe) may be onto something. After all, it can be argued that the New York-based Marvel Comics superhero represents facets of your Jewish male stereotype. As Parker, he is angst-ridden, perpetually struggling with moral dilemmas. As the Amazing Spider-Man, Parker veils his personal pain behind a wisecracking demeanor -- even as he battles deadly supervillains.

"Spider-Man is a character that spends his life trying to pay down his guilt," Raimi said. "The only difference is that it's caused by his uncle, not his mother. That's a real classically Jewish quality -- to be very aware of your sins in this life and try and make amends for them in this life."

Raimi's journey from cult favorite to the man helming a $100 million-plus endeavor hasn't changed his priorities -- a fidelity to family and friends instilled in him during his Jewish upbringing.

Much is riding on the movie debut of Marvel's flagship character. For Columbia and parent company Sony Pictures, the would-be blockbuster -- one of the studio's costliest -- is designed to lock horns with the next Star Wars installment. For comic book publisher Marvel Entertainment -- which unlike the Time-Warner-owned DC Comics has struggled to bring its plethora of superhero riches to the multiplex -- "Spider-Man" can further the promise of Marvel-inspired franchises "Blade" and "X-Men."

For Raimi, the stakes are high, too. The Journal caught up with the filmmaker in February during an editing session. Throughout the interview, Raimi was hard at work tweaking footage. He must not only carry the corporate concerns but deliver a movie that will satisfy comic book fans -- prickly purists who have already criticized everything from Raimi's liberal interpretation of supervillain Green Goblin to Spider-Man's "organic web shooters" (in the comic, Parker invents mechanical web-spinning devices).

"Spider-Man" will also give Raimi the chance to re-connect with his core following -- smitten with the kinetic, high-velocity style of his early work -- and to score his first blockbuster.

While Raimi co-created the wildly successful "Hercules" and "Xena: Princess Warrior" syndicated TV programs, even his best feature work -- pulpy freakfests "Darkman" (1990) and "Army of Darkness" (1993) -- found their audience on video after inauspicious theatrical runs. Subsequent fare, such as "A Simple Plan" (1998), brought critical acclaim but did not exactly burn up the box office.

If such pressures concern Raimi, they do not penetrate his affable demeanor. Even in the eye of the hurricane called "Spider-Man," Raimi appears relaxed.

Raimi grew up a world away from Tinseltown's tribulations in Detroit, where he was raised by parents of Russian and Hungarian Jewish descent in a Conservative Jewish home that included older brother Ivan, now a screenwriter and physician; younger brother Ted, an actor, and older sister, Andrea. Raimi's paternal grandfather was a merchant who traveled to Holland and sold spice.

"He acted as a sponsor for many Jews that came from Poland before the war closed those borders," Raimi said. "My father is very proud of that and so am I."

Raimi nearly went into his father's retail furniture and appliance business. However, he and his high school buddies (including actor Bruce Campbell and director Scott Spiegel) developed an interest in filmmaking.

Despite his avid interest, Raimi refused to major in film at Michigan State University.

"My father told me, 'If you want to be a filmmaker, don't study film. Study literature, so that when you finally make pictures, you have something to bring to it.' That advice really paid off for me," Raimi said.

What attracted Raimi to Spider-Man as a teen in the 1970s was "a lot of the character and the soap opera. That's the great strength of the comic book and that's what I tried to put into this picture. You'd read 'Batman' and 'Superman,' and, although they were a lot of fun, only Spider-Man was aware of girls and was afraid to approach them and was the underdog.

"He was picked on and didn't always have the money to do the things he wanted. He was an identifiable kid with problems and conflicts. As a teenager, he was often misunderstood. He wasn't always hailed as the hero," the director said.

"Spider-Man" was Raimi's favorite title, but he also loved "The Shadow." In the 1980s, Raimi lobbied to direct the movie version...to no avail.

"When Universal didn't want me for the job, I said, 'Well, damn it, I'm going to write my own 'Shadow,'" recalled Raimi, who conceived his Gothic antihero Darkman in the spirit of the venerable pulp character.

Raimi's loyalty to family and friends is a big part of his fabric and his success. He repeatedly uses the same crew members, has cast Ted in roles and, with Ivan, co-wrote "Darkman" and "Army of Darkness," the second sequel to 1982's "Evil Dead," which put Raimi and Campbell on the Hollywood map. Raimi has also collaborated with old pals Joel and Ethan Coen ("Crime Wave," "The Hudsucker Proxy") and Frances McDormand ("Darkman"). With Spiegel and Holly Hunter, they all once shared a Silverlake house.

"He's always surrounded himself with really menschy people," said Robin Felton, 45, Raimi's first cousin, who met husband Jim Felton, a Jewish Federation Valley Alliance gifts chair, while working in production on "Darkman." She said, "He's really a pleasure to be around. I've never heard him raise his voice [on the set]."

Felton remains close with Raimi, a family man who resides in Los Angeles with his wife, Gillian, and three children, belongs to a prominent Reform temple, and sends his boys -- ages 7 and 5 -- to Hebrew school.

But get Raimi together with his brothers and hilarity ensues.

"There's nothing better than working with your family," Raimi said. "Because as nice as it is for everybody else to spend time with their family, it's a whole other level of closeness when you can write together and share jokes and ideas, and they're not afraid to say, that doesn't work. There's an honesty and you know it's not going to break the relationship."

"They were always very funny," Felton said of the Raimi brothers, "but in an intelligent, wry way. Not like The Three Stooges."

Not that Raimi is above Stooges humor. Witness the "Evil Dead" trilogy, which boasts Stooges-style slapstick and characters named Shemp.

The tone of Raimi's oeuvre matured considerably after 1995's "Quick & the Dead," during which time Raimi met his wife.

"Things are one way when you're a single man and you don't have children and you look at life in one particular way," Raimi said of his cinematic evolution. "As you get older, we all take on different points of view and perspectives."

Yet as with family, Raimi, who has already signed on to direct a "Spider-Man" sequel in 2003, has not forgotten his roots.

"I'd love to get back to doing to the fantasy and fun pictures," Raimi said. "Maybe 'Spider-Man' is a step in that direction. It would be interesting to make 'Evil Dead 4' at this point of my life. It'd be a blast."

Posted by Greenblatt the Great! at 9:49 PM