I BUGGED Out This Weekend in Style! 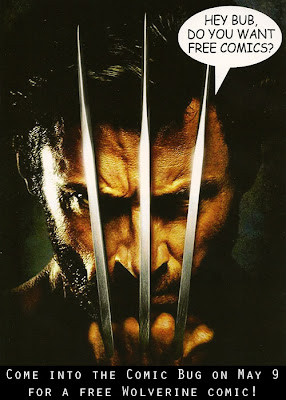 I want to thank my buddy, comic book writer MIKE WELLMAN and JUN GOEKU at their store, THE COMIC BUG in Manhattan Beach, CA, for welcoming me back to take part in their FREE COMICS DAY party.

I had so much fun at their event last year that I've been talking to Mike about returning for about a year now. Both years, attendance was packed, and the families, kids, and unmarried types I meet at the Bug's FCD events are off-the-hook sweet and fun folks. They love to joke around. It's just a great neighborhood shop, and if I lived closer, I'd be hitting it way more often, so MB is lucky to have it!

This year, I had a new book to sell called SILLY GOOSE, my all-ages comic.

I haven't seen WOLVERINE yet, but I have a feeling it couldn't be more fun than hanging out with everybody at the Bug, including pals RAFAEL NAVARRO , CESAR HARO, and JERRY BOYD.

Professional face-painter and artist AMY HAGEMEIER, my partner-in-comics on the new comic strip PAPERGIRL (which will be collected in book form next year), did an outstanding job converting kids and adults alike into Spider-Man, Darth Maul, random sprites, Spider-Woman (yes!), and "Spiderine," an unholy hybrid of Spider-Man and old-school Wolverine which I guess would please Sam Raimi and Herb Trimpe.

To top everything, thanks to a little girl named Maggie, I had to put Sharpie to paper and bust out a sketch of Manaphy from Pokemon. But I'm not complaining, as Raf and pals were conjuring up beee-yootiful, sensitively rendered sketches of Captain America, Reds Skull and Sonya, The Phantom, Aquaman and (yes!) Spider-Woman!

As always, Mike and Jun were hospitable hosts, providing on-site lunch and refreshments for the cartoonists, who included some new cool cats I got to meet, such as CHRIS MORENO. What made this year better was that we got to enjoy dinner with Mike and Jun right after the event. I usually hit Valentino's Pizza next block over for a good slice, but Raf wanted a sit-down place (good call, buddy!) so we hopped over to a local Round Table restaurant and enjoyed some pizza and beer. That was a laugh and a half. Mike is funnier than "Family Guy," and Mike and Jun shared some hilarious war stories from the comic book convention depths.

I hope to be back at the Bug for their 24-Hour Comics event in October, as well as on FCD 2010 with yet another new book. In the meantime, I'll brush up on my Pokemon and Sonic the Hedgehog sketches.
Posted by Greenblatt the Great! at 5:45 AM