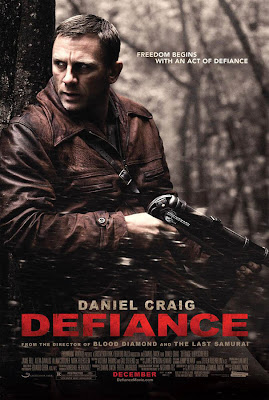 Can you tell I'm catching up on my movies via the magic of DVD rentals?

I don't have much to say about BABY MAMA. While the two leads are good sports (and I didn't realize that Greg Kinnear and Steve Martin were in this film, so that was a shocker), I thought the script may have been better if Tina Fey wrote the damn thing as well. It's not a bad comedy, but it's not a great one either. And Amy Proehler's white-trash character is not pushed far enough. She's kind of a smart dumb chick, so there's not enough contrast between the characters. They should have made her a total hillbilly or something. Also, the outcome for Fey's character is obvious from the minute Greg Kinnear steps in. I enjoyed HEY, LADIES on the soundtrack though!

I enjoyed DEFIANCE a lot. What holds it together are terrific performances by Daniel Craig and Liev Schreiber, two solid actors as two tough Polish-Jewish brothers not about to take Nazi occupation lying down. 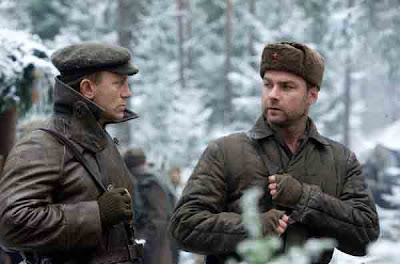 Craig has sold me on James Bond, so now I'm always up for one of his films. He's always charismatic. (Should be interesting to see him play a villain in a comedy as Red Rackham in the upcoming TINTIN movie). While I didn't completely enjoy the Jewish-themed EVERYTHING IS ILLUMINATED, which I thought was overlong and overly ponderous, Schreiber (who directed that film) was good in that, too. What's amazing is that DEFIANCE is based on a true story (I'm sure some liberties were taken for dramatic purposes, as this did come out of Hollywood). Given the well-known outcome of the Holocaust among the Jewish population (6,000,000 killed; another 6,000,000 non-Jews killed), this is a rare Holocaust movie in that the Jews are not depicted as total helpless victims and it doesn't have a completely downbeat ending. And because it's grounded in reality and not a wild cartoon fantasy revenge flick, like the upcoming INGLOURIOUS BASTERDS will be (which is not a criticism of IB, just a different genre of film), there's something satisfying about the heroes here triumphing, as it may have mirrored real events (I don't know the facts about the real incidents so I'm not sure what's based on reality here). There's also much angst among the characters over the dangers of acting like the Nazis even as they attempt to defeat them. DEFIANCE is kind of a historical action film from an angle I've never really seen before in World War II films.
Posted by Greenblatt the Great! at 8:15 AM