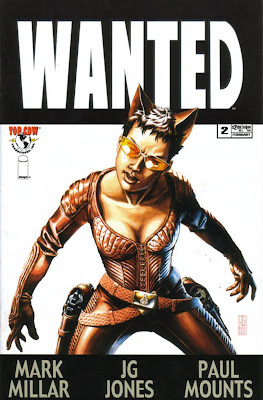 If ever there was a case study where the source book was better than the movie, WANTED is that property.
I finally read the graphic novel WANTED last week, which, once I got past the ultra-cheesy device of modeling the lead characters after celebrities (Halle Berry and Eminem), I pretty much enjoyed. I thought the story was pretty good given that the premise, at first, turned me off. With the crazy villains introduced, it had some of the visual elements of WATCHMEN and the HELLBOY movies going on.
So then I watched the WANTED movie (2008)...well, started to watch it, after half an hour, I yanked it out of my DVD machine and threw it out the window.
The first problem (set up by the book, actually) was that they didn't get Halle Berry and Eminem to play in the screen version, so the casting was distracting. Instead of Halle Berry they the great African-American actress Angelina Jolie and an actor who resembled Eminem about as much and had an annoying screen presence. Then they replaced the Jewish scientist character with Morgan Freeman (going in a totally different direction with that character). They scrubbed out some of the politically incorrect office-place characters, traded the European vibe of the book for a phony, dumbed-down American tone that didn't ring true. The lead character's voiceover stuff was smarmy and annoying and instantly took me out of the story because it instantly felt like a big, phony put-on of a cartoon.
They also got rid of the costumes and the super-villain fraternity element, which is a let down in this age of HELLBOY movies and CG effects where there was no reason why they couldn't recreate those elements. And, from what I read online, a key character was killed because the person portraying said character didn't feel it was just to let the character survive. Wow.
So what was left was a shell of the graphic novel, and if you're going to futz with a graphic novel that much, why not just call something else?
I'm reading KICK-ASS now, by the same writer, and I plan to rent the movie version when I'm done with the comic. Hopefully, that won't be a letdown either. I hear the KICK-ASS movie is pretty good....
Posted by Greenblatt the Great! at 12:12 PM