There's nothing like a road trip, especially when it's with my pal Javier Hernandez and we're going to APE! The Alternative Press Expo at the Concourse in San Francisco, in many ways, is our favorite of all comic-book conventions to sign comics at. It's a nice break from the mainstream/Hollywood hype and cheesy D-list celebrity autograph shows that you'll find now at SDCC and Wonder Con, it's got the coolest creators in a venue where you can actually talk to people, it's a terrific weekend  socially, and the food around SF/Oakland/Berkeley is off the hook! (We have so many food traditions in this town, they're going to need to expand APE for a week so we can hit them all.) More L.A. posse, such as Bernyce Talley, Rafael Navarro, and Mike Wellman, will be up there. We also enjoy reconnecting with unique to the area friends we have made, such as the Padilla family-----Ricardo, Rosie and Sophia----and my buddy the Art Chemist, Jerry! Not to mention the entire Gumby Comics/WildCard Ink operation, headed by Mr. Mel Smith!
Witness exhibit A) that's Jose Cabrera on the right with superfan Andrew from last month's 3rd Annual San Gabriel Valley Fest: 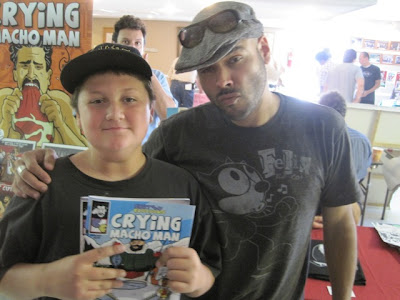 Jose is one-half of CARTOON FLOPHOUSE, where he rocks his CRYING MACHO MAN magazines. Jose and I will occupy booth #109 and #110 at this week's APE. If you don't believe us, go to booth#111 and ask our buddies Jim Lujan and Gras Rodriguez, who will also be up there. As will GHOULA co-founder Rich Carradine with a new comic book, GHOULA COMIX#1, which many of us have contributed strips to (the anthology's theme: ghosts and Los Angeles). Here's Javier and Jim "The Luge" Lujan, by the way: 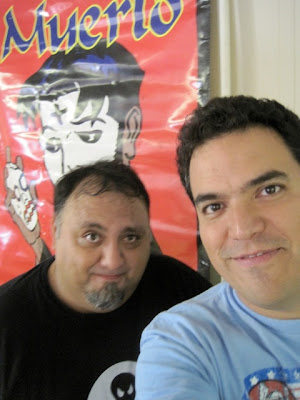 I'll be driving up with Jav, and we're already looking forward to returning for another grand-slam breakfast at Ahn's Burgers in Oakland. Ignore all reviews and go there for their eggs and coffee. It's good stuff. Our buddy Rhode Montijo turned us on to this place before he relocated to the East Coast. And speaking of Rhode, he's in the news this morning with his terrific new children's book, HALLOWEEN KID, which all fans of great children's books must own. It's his best one yet! 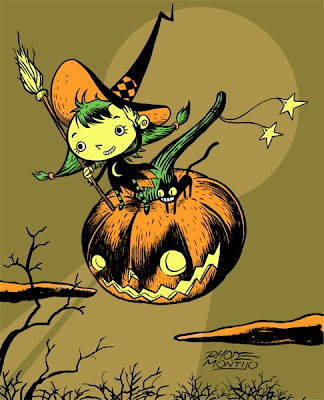 He won't be at APE this year but he'll probably be at San Diego Comic-Con, that's always a fun place to catch Rhode with his co-hort Jamie Baker, who will be at APE at the Abismo/Nerve Bomb booth. 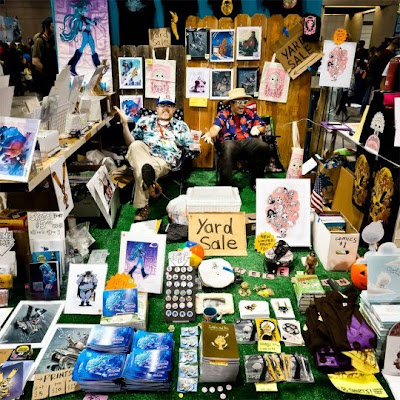 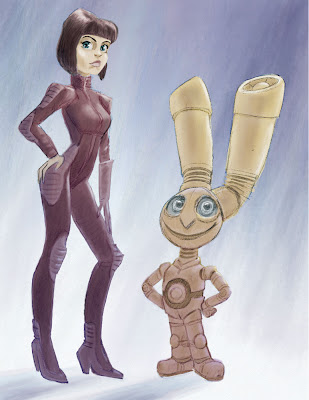 If you're in the Bay Area this weekend, come on down to APE and take in the super-creative kinetic energy in action!
Posted by Greenblatt the Great! at 6:23 AM

Hey, that's great seeing HALLOWEEN KID in The Beat! Rhode's talent shines with imagination and fun (two things lacking in the entertainment medium, for sure!!)

Michael, this APE could rival King Kong for sheer scope and pageantry! Sounds like a huge contingent of us LA-area toonists will be there dazzling the fans with our new books, and keeping the food economy in San Francisco in the black for the end of the year!

Hope to see many Cartoon Flophouse (and Los Comex) readers there!