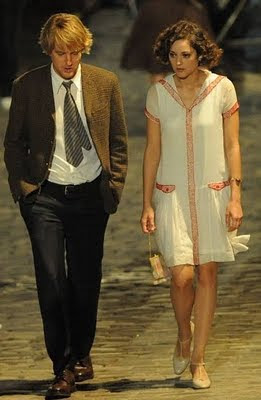 Saw a bunch of movies recently...None of them classics this time around.....My quick takes....
MIDNIGHT IN PARIS
- Tis an Aushenker tradition that I go and see the latest Woody Allen movie with Mom. We were particularly excited because A) the movie is set in Paris (my Mom's side of the family is French and we have a personal connection with the city and with our relatives who live there) and B) MIDNIGHT got some over-the-top wildly enthusiastic box office and critical acclaim. Two reviews I came across said it was a "return to form" for Woody Allen after a string of weak, nihilistic comedies.
Well, I was a tad disappointed. I'm not sure why this movie got such a better critical reception than some of the others but it's not a return to form if you compare it to Allen's '70s output of comedy classics. It's a solid late Woody entry but not my favorite among his recent stuff.
If I had to list the stand out comedies since the late '80s (when Allen began cranking them out and producing some less than classic movies), I would say the best comedies have been ALICE, DECONSTRUCTING HARRY, SWEET AND LOWDOWN, CURSE OF THE JADE SCORPION and WHATEVER WORKS. (Note I'm not including a pair of dramas - MATCH POINT and VICKY CRISTINA BARCELONA - which were really good.) Every other comedy has been either weak or not particularly memorable in my opinion...although every Woody Allen movie has at least a few good scenes/jokes.
MIDNIGHT is definitely up there among recent Woody Allen comedies---and the cast, Owen Wilson and Michael Sheen and Marion Cotillard in particular, are great in this movie... but for a comedy that relies on a time-travel gimmick, I found the story line lazy and not as ambitious a comedy as it could of been, as Allen missed many opportunities to exploit and milk the comic situations from the time-travel set-up.
Allen only hints at having some of the characters follow Owen Wilson back in time....and he does not have the characters follow Owen back to the present. Likewise, when the characters of yesteryear read text from Owen's book, which is from their future, Allen could've dropped some anachronistic references into Owen's book (alluding to, I dunno, Facebook? Twitter? Steve Guttenberg? Lil Wayne? Chemical Ali? Pringles potato chips?) that would've thrown those characters through a loop. I personally don't care about the technical aspects of time-travel, such as characters' actions in the past disrupting events in the future, but it woulda been nice to see more of the comedic value of the the time-travel premise by creating some chaos with characters coming and going. After all, for the longest time, you're not sure whether or not Owen is actually time traveling or if he's just drunk or dreaming it, but once it's established that he actually IS going through time, upping the ante, comedically, would've been more fun for me. As is, the time-travel humor...and the story's resolution and subtext, is kind of slight.
SOMEWHERE
Sofia Coppola had me at "konnichiha" in LOST IN TRANSLATION....but SOMEWHERE went NOWHERE! Largely because this is basically a riff on the same story: a numb lost soul (Bill Murray in LOST, Stephen Dorff here) stuck in an upscale hotel who comes alive once a much younger girl (Scarlett Johanson in LOST, Elle Dakota here) enters his world. Stylistically, instead of Wong Kar Wai drag, we get Antonioni drag here. If you feel like seeing LOST IN TRANSLATION - Euro-style, then perhaps you might like this film. I found it kind of redundant and a lesser version of LOST.
THE GHOST WRITER
Not the movie about the motorcycle-riding, flaming skull superhero but the Roman Polanski movie involving a memoir writer for a thinly veiled version of Tony Blair. I didn't dig this film as much as I wanted to, largely because the political analogy felt bogus, the quasi-Hitchockian intrigue didn't add up to much, and, in a movie where the central character requires depth, Pierce Brosnan can't act.
BLACK SWAN - I didn't see what the big deal was about this film. I'm not a big Darren Aronofsky fan to begin with...didn't think much of THE WRESTLER or any of his previous movies...and, in my opinion, Natalie Portman can't act.
BLUE VALENTINE - Michele Williams and Ryan Gosling CAN act, but the storyline really goes nowhere interesting or that we haven't seen before in a million films. It's a big so-what. Which is too bad because they're good in this movie. When it comes to character-study movies with slight storylines, I preferred the Michelle Williams movie WENDY & LUCY. 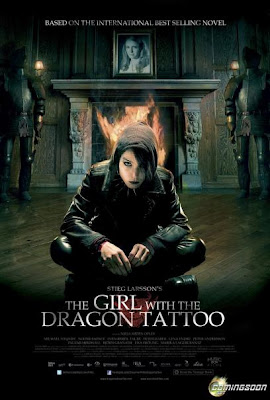 GIRL WITH THE DRAGON TATTOO
A really good thriller/mystery with interesting characters. Kind of disturbing in places, but very absorbing. Great to see a movie with a cast of actors that you don't recognize from other movies. Actors deliver great performances. And I'm partial to movies that feature journalist protagonists!
GIRL WHO PLAYED WITH FIRE
This sequel kind of went over-the-top silly, with a heroine who can not die, much more of the same from the first movie, and KGB villains instead of Nazi villains. Coincidences become too convenient. It's kinda the TEMPLE OF DOOM of this series - cartoony, still kind of fun, and not nearly as good as the original.
GIRL WHO KICKED THE HORNET'S NEST
While this movie, essentially a sequel to FIRE, is better than FIRE and brings things back to earth a bit, it also pales to the original movie.
That said, all three GIRL movies are entertaining and I think star Daniel Craig and director David Fincher is good casting to do the American version of this trilogy. I'm not usually interested in remakes, but a Fincher version of GIRL WITH THE DRAGON TATTOO, based on his previous thrillers such as SEVEN and ZODIAC, had a shot of being really good.
Posted by Greenblatt the Great! at 7:03 PM