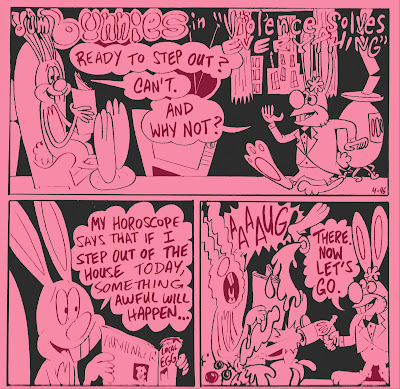 Somewhere in the early 2000s (I think), I remember coming across some kind of animated cartoon called Dumb Bunnies on TV somewhere. I think it lasted a season or two.
By coincidence, years earlier, I had come up with my own DumBunnies cartoon - it was just a one time gag comic strip.
I could have easily kept going on it and turned it into a regular series, but unlike my other stuff, like Those Unstoppable Rogues or Greenblatt the Great!, I found it to be too limited - a one-joke idea at best. It became one of many one-shot gag strips I drew in the '90s, some of which I sold to HEAVY METAL magazine.
Nevertheless, here is that DUMBUNNIES comic strip for your weekend pleasure: straight outta 1996! Enjoy please!
Posted by Greenblatt the Great! at 2:14 PM

Wonder what other treasures you'll find as you go through the Cartoon Flophouse Goldmines....?