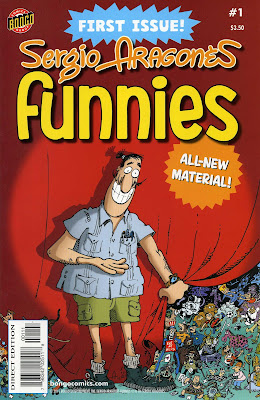 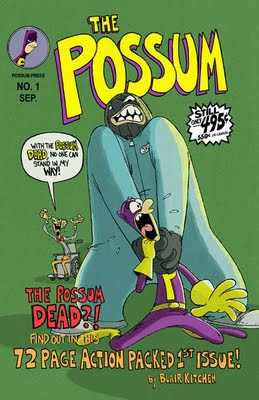 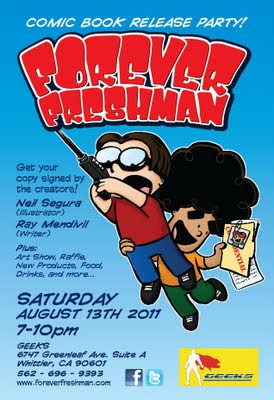 Came back from San Diego Comic-Con 2011 with a stack of books to read...

Not included in that pile is my new friend Lonnie Milsap's just-released second compilation I HATE MY JOB, another collection of his fun, sick, single-panel gag cartoons that harken back to Gary Larson's THE FAR SIDE crossed with some politically incorrect twists on NEW YORKER cartoons. The most delicious element is that he inserts a stock caricature of himself into most of the proceedings for an extra tickle. Yeah, he sold them at SDCC, sharing a table with alt comics legend Keith Knight, but I waited till I was back on the mainland to pick it up at his signing last weekend at the Talking Stick coffee lounge in Venice. If you haven't caught Milsap's terrific work, he'll be signing and doodling up both of his collections on August 10 at Hi De Ho Comics in Santa Monica. Highly recommended!
Another winner is Mark Arnold's fun and informative new book "If You're CRACKED, You're Happy!" Vol. 1 the Early Years ---- A history of CRACKED that comes in two volumes. I'm early in this read but it's really terrific so far and Mark's writing is clear, direct, and at once historical yet informal and the opposite of didactic, dull and verbose (like some academic books can be...even the ones on cartoonists....). CRACKED magazine, of course, was MAD's greatest competitor (of which there were many) and, as I've found along the way, tons of my cartoonist friends and myself were almost as influenced by and into CRACKED in our early years as MAD itself.

Speaking of MAD, looking forward to reading the first issue of SERGIO ARAGONES' FUNNIES from Bongo by my old CAPS amigo Mr. A, THE POSSUM series by my new buddy Blair Kitchen and SPY GUY by his brother Mike Kitchen (an animator on the terrific Tim Burton-produced animated feature "9"), and FOREVER FRESHMAN by my new pals Neil and Ray, who will have a signing party on Aug. 13 at Geeks Comics in Uptown Whittier.
Right now, humor comics are where it's at, you dig, Doug?
Posted by Greenblatt the Great! at 10:22 AM

That does indeed sound like some good reading material. Like a fool, I missed out on getting the Sergio book from Serbio himself! Will have to correct that this week. And yeah, POSSUM rocks, man!