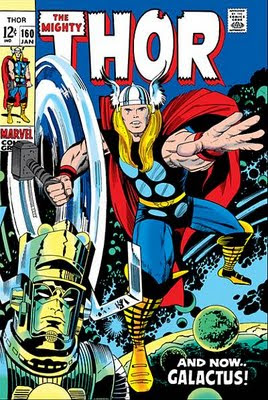 Posted by Greenblatt the Great! at 9:46 PM

What a monster artist he was.

Yes, and what a monster artist he was - great monster comics!

Jack Kirby (Jacob Kurtzberg) was truly a force of nature, not just in comics but well beyond in the pop culture.

People will debate how "good" an artist he was or whether his stylized art is genius or often very hack-y (we know, he was no Neal Adams in the realism department), but the art was only one element of what made his work so influential. It was the scope of his imagination and his visual invention, creating whole worlds from cloth.

And some of the greatest character designs ever. He was definitely a genius when it came to creating complex looking characters such as Galactus, the New Gods, etc.

God bless his memory and the continued fascination with and the influence of his work.

By the way, some of my favorite Kirby designs include Galactus, the Silver Surfer, Dr. Doom, Machine Man, Black Bolt, Titan, Blastaar the Living Bomb Burst, Thor, Modok, Captain America, the Red Skull. Those are just off the top of my head...

Anyone else got some favorites?