I not only miss seeing new art from Tony but I miss chatting with him at conventions and his avuncular sense of humor. We crossed paths at his home during the brief time he and his lovely wife Tina DeZuniga lived in Monrovia in 2008. Thanks to the pending movie, he was enjoying a career bump, working on some Jonah Hex projects for DC including a full-length, lavishly produced graphic novel he drew, written by Jim Palmiotti and Justin Gray.

I had fun writing about STRANGE TALES' THE GOLEM and the PHANTOM STRANGER feature DR. 13 for BACK ISSUE magazine #36 (their Marvel monsters issue), and Tony's art was central to both. 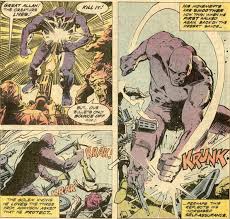 He was a good guy, too, and a fun presence at conventions, and we will for sure honor his personality and his body of work in an upcoming issue of COMIC BOOK CREATOR magazine (where I'm associate editor).

By the way, he hated Hollywood's representation of his Jonah Hex character and he wasn't shy about saying so, even after he attended the Hollywood premier of the 2009 film that starred Josh Brolin. That was Tony. Salt of the earth....

Posted by Greenblatt the Great! at 9:21 AM