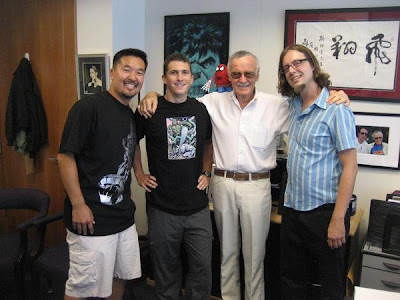 (Make Mine Marvel! is the new "say cheese!")

....I had a great time last night at the Marvel's 70th anniversary party going down at The Comic Bug in Manhattan Beach.

Jun (far left) and the mighty Mike Wellman (far right) always throw a great show when holding events at their store. Last night was no different. The usual gaggle of Bugflies were there.

We gathered around the '60s Spider-Man cartoons playing in the back of the room like moths to the porchlight. Wellman said it's like the Bat-Signal...if he needs to find me, he puts it on and I'll appear. It's true, I was equally mesmerized by those classic cartoons two years running at the Comic Bug's Free Comics Day. My BACK ISSUE! magazine compadre Jerry Boyd showed up and wore us down to the point of sleep deprivation with long-winded stories of contributing articles to the latest KIRBY COLLECTOR (the Lee and Kirby issue, out now). Mike's partner-in-crime Cesar Haro nodded a lot and feigned interest. Actually, it wasn't like that at all. We had a lot of fun gabbing over slices of pizza and a Steranko-style Captain America cake (although my patriotism was called into question when I ate the slice with Cap's head).

Some other regulars were super-cool, like the guy named Ram (pronounced like ROM as in Spaceknight. Do names get any cooler?) Muse played in the background....(I guess Mike wore out the grooves on his copies of "Diver Down" and "The Real Thing").

Then Jerry brought out his copy of the 40th anniversary Comic-Con book and thumbing through it was like a time-travel through the decades. All of our favorite creators in funky hair and clothes!

By the way, the Bug is the ONLY place in early May for Free Comics Day. The energy there is the best! My only lament is that I live too far to the Bug to frequent it as my go-to shop (perhaps it's time for me to move to Manhattan Beach!).

The half/price on all Marvels deal was irresistible. Like Topol in "Fiddler on the Roof," I danced a jig when I saw the prices. And so I scored a pair of vintage SHOGUN WARRIOR comics with the funky Herb Trimpe art. Hey, it was cheaper than AMAZING FANTASY # 15, okay? Simmer down, haters!

Thanks again for the fun, Mike and Jun!

As Mike likes to say, "I'm not the biggest Rob Liefeld fan, but..." now I'm gonna plug the shit out of Jun and Mike's Comic BUg store. So when in the L.A. area, be sure to visit The Comic Bug, the friendliest, most fun place to buy your comics. It's all about the good times. Check it out at ComicBug.com.