Remembering BUDD SCHULBERG, one of the best writers I've ever read.... 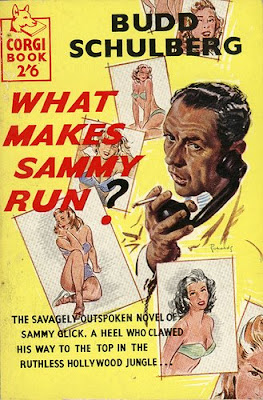 One of my all-time favorite writers has passed away. "What Makes Sammy Run?," "The Disenchanted" (loosely based on his time working with Fitzgerald) and "The Harder They Fall" are three of the best books I've ever read.

Schulberg's writing was funny, colorful, astute, wise beyond his years. He knew how to describe a character. He was a keen observer of Hollywood, of human nature. He knew how to communicate. His prose moved effortlessly. I enjoyed his writing more than I did most of his peers.

"What Makes Sammy Run?" was so smart, so prescient and modern, it could have been written yesterday. Thankfully, Hollywood never found a way to adapt it to the big screen, where they could ruin it. Who could forget slick executive Sammy Glick and the luckless writer Al Manheim? It's eerie how much the book predicted in its sardonic view of the shallow side of Hollywood. I remember reading "Sammy" months away from late 1998, when "Titanic" was released. Dumping all that money into a sinking ship-of-a-movie called "Titanic" ---- as it turned out, it was real life which proved unbelievable (not Schulberg's book) when Cameron's "Titanic" actually made back its $200 million and became the biggest movie of all time. But in the book, it was totally within reason that such a film should sink to the bottom like the ship itself.

He won the Oscar for ON THE WATERFRONT, one of the best American movies. Unfortunately, one of its stars, Karl Malden, also passed away a few weeks ago.

Below is Budd Schulberg's obit per Variety:

Iconoclastic writer Budd Schulberg, who penned the controversial Hollywood novels "What Makes Sammy Run?" and "The Disenchanted" and who won an Oscar for his original screenplay "On the Waterfront," died of natural causes Wednesday at his home in Westhampton Beach, on Long Island, according to his wife Betsy. He was 95.
Schulberg's influence over Hollywood was strong. The Sammy Glick character from "What Makes Sammy Run" is the paradigm of power-driven, amoral studio executives.

Although "What Makes Sammy Run" was never made into a film -- it reached Broadway as a musical in the 1960s, and Schulberg himself directed a 1959 TV adaptation -- works as varied as "The Player" and "Sweet Smell of Success" owe a debt to Schulberg's tale. His novel "The Disenchanted," another bitter tale of Hollywood, also cast a long shadow over the public's perception of the fate of such literary figures as F. Scott Fitzgerald and William Faulkner and the time they spent in Los Angeles as screenwriters.

Neither work endeared him to the film industry, into which he was born and raised (and which he later abandoned). His father B.P. Schulberg had been head of production at Paramount Pictures in the 1930s, and his mother Adeline was an agent. He crossed swords with the industry again when he named names to the House Un-American Activities Committee in Congress (as did "Waterfront" director Elia Kazan). "Waterfront" was seen as an apologia for "ratting." The film's protagonist Terry Malloy (played by Marlon Brando) exposes corruption among longshoremen.

Born in New York City, Schulberg was educated at Dartmouth. But even before that he was a publicist at Paramount, starting at age 17, and was a screenwriter at age 19.

He was uncredited but contributed dialogue to the 1937 version of "A Star is Born." He was credited on 1938's "Little Orphan Annie." A year later he was co-credited by RKO on "Winter Carnival"(with Lester Cole) based on the event at his alma mater. He had been assigned to collaborate with Fitzgerald, and the two traveled to Dartmouth together, but it was not a happy experience. Fitzgerald was at the end of his short life, destroyed by alcohol.

Soon after "Winter Carnival," Schulberg moved east and, in 1941, "What Makes Sammy Run," his first novel, became a cause celebre and major Hollywood embarrassment. Schulberg says his father asked him to shelve the book and his fellow travelers in the Communist Party requested he water down his criticisms of their progressive ideas. He listened to neither.

That same year, he received a story credit on "Weekend for Three" (written by Dorothy Parker and Alan Campbell).

Shortly after the publication of "The Disenchanted," Schulberg testified before HUAC. But "On the Waterfront," which was thought to be a response to Arthur Miller's "The Crucible" (which condemned "witch hunts") won him an Oscar. The film took eight Academy Awards, including best picture.

In 1956 his novel "The Harder They Fall" was adapted into a film starring Humphrey Bogart.

His second most memorable screen contribution (though it was not a hit) was 1957's "A Face in the Crowd," also directed by Kazan. It was the story of Lonesome Rhodes, a down and out folk singer who becomes a cultural hero via television. Schulberg again scored with a prescient look at the far-reaching influence of TV on public thinking.

After "Wind Across the Everglades" in 1958, Schulberg's only bigscreen credit was the 1985 documentary "Joe Louis: For All Times," which he also produced.

A major boxing fan, Schulberg often wrote journalistic accounts of his experiences at ringside and was inducted into the Boxing Hall of Fame in 2002.

Schulberg won an Emmy for "The Angry Voice of Watts, a 1966 special, and also did "A Question of Honor." He had started the Watts Writers Workshop following the 1965 riots, an endeavor that attracted the attention of Robert Kennedy when he ran for president in 1968. Schulberg recalled in later interviews his experience being among those in the pantry of the Ambassador Hotel when Kennedy was shot following the California primary, and how he briefly grabbed hold of Sirhan Sirhan with the gun in his grasp.

In the early 1990s Schulberg worked on a sequel to "Waterfront" entitled "Back to the Waterfront," which for a time was housed at Columbia Pictures. He also reworked "A Face in the Crowd" for Whoopi Goldberg.

Schulberg continued to write in his later years, in pieces for Vanity Fair and Variety's V Life, and was at work on a number of book projects at the time of his death, including a followup to his memoirs, a novel version of "On the Waterfront," Betsy Schulberg said.

In addition to his wife, Schulberg is survived by five children. Burial will be private, plans are being made for a public memorial in New York.

(Ted Johnson contributed to this report.)
Posted by Greenblatt the Great! at 8:26 PM