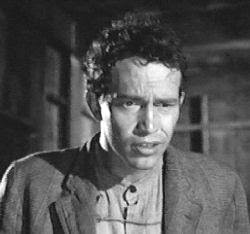 Thanks to the magic of DVD TV collections, I recently had a chance to watch THE RIFLEMAN, a series starring Chuck Connors and Johnny Crawford as father-and-son homesteaders in the Old West. The show somehow escaped me. I believe it was created by one of my favorite directors, SAM PECKINPAH (who writes several episodes and, beginning with episode 4, directs some of them, too).

This action-packed show is a good time, not to mention it features the father/son template found years later in stuff such as LONE WOLF AND CUB and THE ROAD TO PERDITION.

Best of all, it's a veritable parade of before-they-were-famous guest stars. The first episode features a young Dennis Hopper, the following one Michael Landon, circa his I WAS A TEENAGE WEREWOLF days, and the fourth, in a harbinger of things to come (THE WILD BUNCH, BRING ME THE HEAD OF ALFREDO GARCIA), teamed Peckinpah with the quirky and charismatic Warren Oates. Landon and Oates return on DVD vol. 2. In both of his episodes, Oates plays a wild oafish outlaw.

The show's opening, featuring Chuck Connors unleashing his rifle in machine-gun rapid fire fashion while staring down the camera, is terrific (although nothing comes close to the long, false ending-stuffed opening of THE PRISONER for me). Not a totally essential viewing but interesting and entertaining nevertheless (better to watch Warren Oates than to read War and Peace, I always say...)
Posted by Greenblatt the Great! at 2:45 PM

Your post really cool and interesting. Thanks very much.