They say that "context is critical." Well, thanks to TWO AND A HALF MEN, I now understand how subversive, depraved, and criminal to children the new ALVIN & THE CHIPMUNKS movie is. 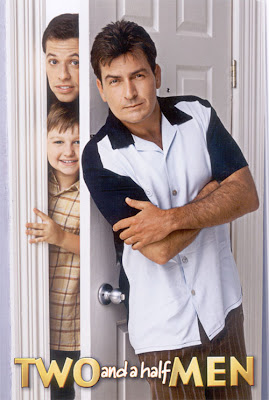 There's a TWO AND A HALF MEN commercial that runs in perpetuity in the Los Angeles market in which Jon Cryer's character brags, "I don't mean to toot my own horn, but I'm dating two women." To which Charlie Sheen's character says something like, "You're dating two women and you're still tooting your own horn?" Well, you don't need a Sexologist to explain the innuendo of this golden piece of writing.

This commercial has been running 4-EVER, like 90 times a day, on KTLA. Well, like a great running gag, the above TWO AND A HALF MEN TV promo ran again last week, and it was quickly followed by a short commercial for the new kiddie film, ALVIN & THE CHIPMUNKS: THE SQUEAKQUEL, in which Alvin goes, "I'm tooting my own horn!," followed by the mimic of a trumpet blowing and a gesture with his hands in a way that I can now safely interpret as shady, suggestive and obscene.

Thank you, TWO AND A HALF MEN, unlikely morality police!
Posted by Greenblatt the Great! at 11:41 AM