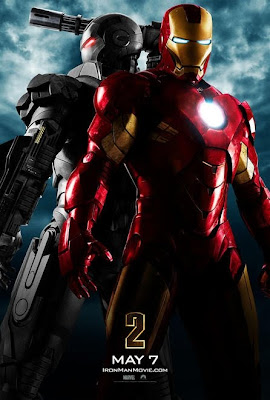 I thought I'd run this to balance out the estrogen in yesterday's post.

It's the just-revealed poster for "IM2." I'll be seeing this movie, but I hope this franchise hasn't jumped the shark. I haven't been heartened by shots of Black Widow and Whiplash from this film. Oh, well, time will tell.

Funny though how the commercial for SHERLOCK HOLMES has a twist on the IRON MAN scene in which the girl walks in on him when he's in a weird position. In IRON MAN, he was strung up by his armor. In SHERLOCK, he's cuffed to his bed. It's the same basic joke. Is this now Robert Downey Jr.'s trademark scene, written into the contract of every movie he makes?
Posted by Greenblatt the Great! at 6:42 PM