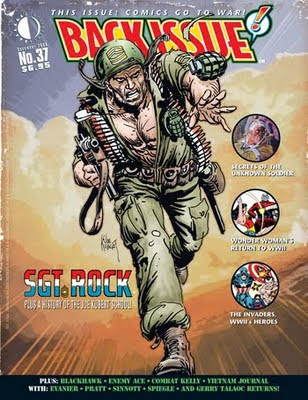 If the current issue of BACK ISSUE! # 37, on stands now through mid-January, is significant for one thing, it may be the return of artist GERRY TALAOC. True, I wrote the article, on one of his most significant comic book titles, The Unknown Soldier, which became my vehicle for interviewing Mr. Talaoc and giving him some long overdue attention. However, this statement is not as self-serving as it sounds (although I am certainly very proud to have a hand in finding Mr. Talaoc)...because my article, not intentionally at first, became the vehicle for arguably the first piece of new Talaoc art to be published since he quit the business in the early '90s after the work dried up.

And what a work of art it is: a 2007 painting of The Unknown Soldier, unmasked (Talaoc was the first artist to draw the character without his trademark bandages), cornered in a trench as a bunch of Nazis hurl potato mashers his way. He's armed with a machine gun and there's no question who is going to emerge from this fight victorious! Pity the poor stormtroopers!

Here is the first cover of the David Micheline/Gerry Talaoc run: 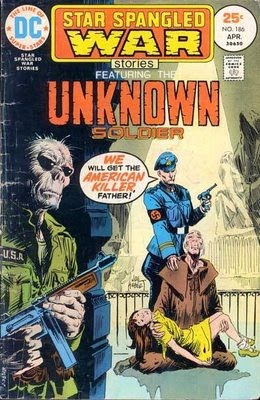 Had it not been for the fact that Joe Kubert had already been commissioned to do the Sgt. Rock cover, there was a good chance that Mr. Talaoc's surprise gift to BACK ISSUE! would've graced the cover. It did appear in a bubble on the cover, and BACK ISSUE! readers who download the digital issue will own the painting in all of its full-color glory. 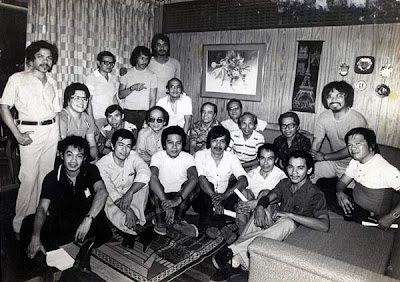 Here is Mr. Talaoc back in the day (that him in black in the bottom left corner), probably in the early '70s, around the time when DC Comics enlisted the Filipino artists to draw scores of its horror, fantasy, futuristic and sword and sorcery features. 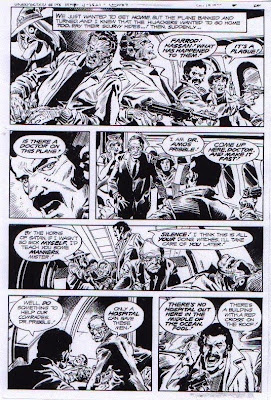 Ironically, it was only three or four years ago that Mr. Talaoc moved to America. During his heyday as a DC and Marvel artist, he worked from his native Phillipines - a country once known for its prodigious comics industry that produced Nestor Redondo, Tony DeZuniga, Alfredo Alcala, Alex Nino and scores of other excellent draftsman who became household names to diehard comic-book fans in the 1970s. 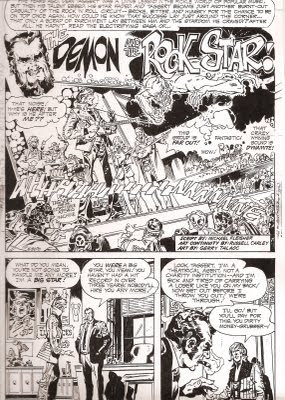 Here is a page of HOUSE OF SECRETS that Mr. Talaoc drew that my buddy and fellow BACK ISSUE! writer Jerry Boyd owns. Ain't it a beaut? Thanks, Jerry, for sharing the Gerry! 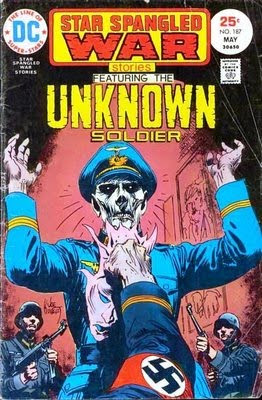 I guess what I love about Gerry Talaoc's style is his mix of the real and the cartoony - a style pioneered by the likes of master cartoonists Milton Caniff and Chester Gould. His pen has a real energetic flair, and even the issues which he merely inked by other artists (such as Kubert or Dick Ayers) came alive thanks to his hand. 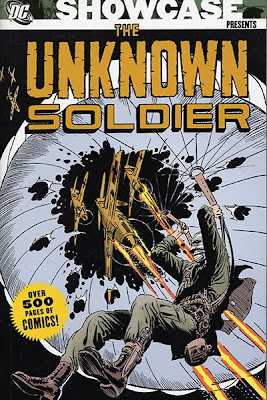 For further reading, check out Gerry Talaoc's first few issues of "The Unknown Soldier" (deftly written by David Micheline) in this above Volume One of SHOWCASE UNKNOWN SOLDIER. It ends on a real cliffhanger, whetting our appetite for a long run of Talaoc-drawn "Unknown Soldiers" that followed...

Gerry Talaoc is a master cartoonist!

If any of the comic companies had any brains, they would snap him up!

In the article, you state that #183 --the classic 8,000 to One--is the first Michelinie-Talaoc collaboration.

BTW, it was wonderful to finally read a retrospective on the Unknown Soldier and especially on Gerry, whose last name I still don't know how to pronounce! Is it "Ta-la-ock"?

I love that House of Secrets issue with the early '70s vibe. It reminds me of an episode of Rod Serling's Night Gallery from that same time period.

Thanks for the correction, Dexter! I had that info handy but it must've got messed up somewhere along the way.

It's "Ta-LA-Wok," I've been told by his fellow countrymen and DC artist Tony DeZuniga (now don't ask me how to pronounce DeZuniga :)

Thanks for the kind words, too, Dex. I agree with you wholeheartedly, a look at both UNKNOWN SOLDIER and Gerry Talaoc was long overdue. In fact, I was inspired to track down and interview Gerry because there was so little info on him in the otherwise excellent and pretty comprehensive issue on the "Filipino Invasion" of mainstream American comics in COMIC BOOK ARTIST # 4 (Vol. 2., Top Shelf; Sept. 2004).

P.S. Dexter - are you from Philadelphia? What's your story? :)