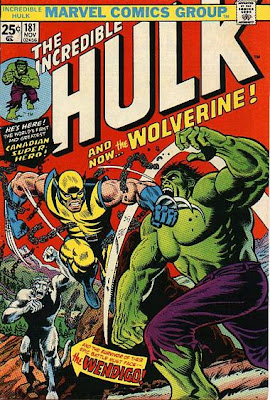 I don't want to get all political or anything, but what's with this Hugh Jackman/Twitter $100K charity B.S.? And what about Wolverine writer/co-creator (with artist Herb Trimpe) Len Wein?

Len Wein, who also co-created another comic book character turned movie property, Swamp Thing, is only the creator of Hugh Jackman's only successful, guaranteed money-in-his-bank account character. If you took away the X-MEN franchise, Jackman would have 0 hit movies (THE PRESTIGE and SCOOP were not bread-makers).

Wein lost his house to a fire on April 6, conveniently less than a month before Fox's WOLVERINE movie comes out. Wouldn't it be one hell of a movie promotion (because nobody moves a muscle in Hollywood if it doesn't bring in publicity, which equals bucks...) to help Wein rebuild his life post-fire?

Currently, "Twitter addict' Hugh Jackman, out of the goodness of his heart, is offering $100K to a nonprofit if you can convince him in a Tweet (!) that he should give his money to said nonprofit. First of all, how convenient this contest comes weeks before WOLVERINE's release. Second, are we supposed to truly believe for a minute that Hugh actually Twitters his own tweets to his twats, and that the money is coming out of his pocket (I'm guessing an audit of the WOLVERINE marketing expenses will yield $100 K filed under "MISCL. [TWITTER]." And C) if you're a studio, instead of throwing $100K on a dumb, trendy Twitter marketing campaign, wouldn't it be wiser to apply said $100K to helping out Wein and (since its Hollywood and they can't be altruistic without getting publicity for it) wringing some publicity out of assisting Wolverine's co-creator post-fire?

I don't know Wein personally and I will not be presumptuous enough to say that Wein would even welcome or accept such help, but I'm disheartened that an attempt from the studio/producers, in gratitude for the character that's made hundreds of millions for them, has not been forthcoming. Of course it's too much to ask Fox and Marvel to cut Wein in on profits from the WOLVERINE movies. But what about a little something-something now that he's going through this game-changing event?

Unfortunately, this seems to be a new wrinkle on an old story---the dysfunctional history of comics in which talent creates multi-million dollar characters for companies, gets none of the profits and little credit due to work-for-hire relationship, and then gets extra shafted when the hard times come and said companies do not display any appreciation or assistance to the people who built them. It's Siegel and Shuster all over again. Not only sad, but a shanda!
Posted by Greenblatt the Great! at 7:30 AM