The Legend of GHOST RIDER # 35 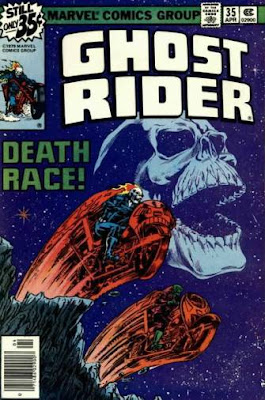 Kind of a running gag (but not really a gag because I love the comic) between artist STEVE LEIALOHA and me is GHOST RIDER # 35.

As a kid, I bought this issue of GHOST RIDER, a filler issue written and drawn by JIM STARLIN, and inked by Steve, and it's haunted me ever since. A gripping, taut issue that basically revolves around a death race between Ghost Rider and the Grim Reaper on motorcycles. See, when the Grim Reaper touches an innocent victim, that person instantly turns to dust. Well, Ghost Rider keeps losing, and the stakes are raised when the final target in this little conest of the Reaper's is an innocent little girl.

For years this issue has stuck with me, and I've often said that if more issues of GHOST RIDER were this good, it would've been one of the best series of the '70s. Issue # 35 kind of placed GHOST RIDER, for one red hot minute, in the league with EC horror titles. For one issue at least, the book's full potential was realized.

Anyway, back to Steve Leialoha. I've met him only over the phone, interviewing him for articles on such books he worked on as THE HUMAN FLY, but in recent years, I'll run into him at SD Comic-Con, or at APE or some convention, and every time, as a shorthand to remind him who I am (as he meets soooo many people at these things), I evoke the magical, now mythical GHOST RIDER # 35. Steve is one of the mellowest, most laid back and friendly guys in the comics industry so he takes all of this in with some mild bemusement.

At Wonder Con 2009, the madness came to a head when my longtime pal RHODE MONTIJO (he of the children's book CLOUD BOY and the excellent comic book series PABLO'S INFERNO -- see www.pablosinferno.com) finally bit the bullet and bought GHOST RIDER # 35. He had a friend, STEVE MOCK, ferret it out and buy it for him at the convention (for only $2.50...a steal!) while Rhode and his pal JAMIE BAKER manned their booth. And Rhode read the issue during a slow moment and agreed it was quite the head trip.

Now I was just up the aisle from Rhode's booth, a guest of WILDCARD INK, which is publishing my GUMBY'S GANG STARRING POKEY book. So when Steve Leialoha ambled down our aisle, I had to make some magic happen. So faster than Ghost Rider racing Grim Reaper, I raced around between all the parties--Rhode, Steve, the comic book, Jamie (who had the digital camera)and hooked up this photo of my buddy Rhode, myself, and Steve. As you can see, it was taken at the WildCard Ink booth (note the humorously schizo Gumby/zombie book dichotomy in the background). 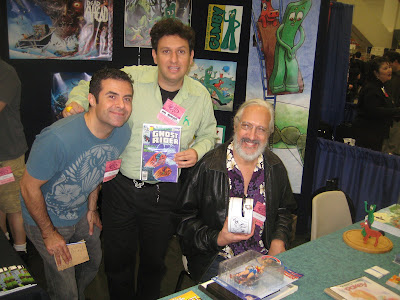