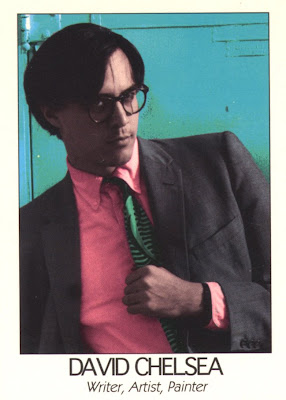 David Chelsea is still in love...with cartooning!
That’s good news for us readers in love with alternative/independent/art comics (whatever the hell you wanna call ‘em these days…) who have kept an eye on David as he detoured into illustration and meandered away from the beautifully drawn, cleverly written miniseries and graphic novels he had built his legend on, namely with DAVID CHELSEA IN LOVE. David also gave us his PERSPECTIVE! FOR COMIC BOOK ARTISTS guide, and the blink-and-you-missed-it bohemian hellion opus WELCOME TO THE ZONE.
But weep no more, art comics-lovers, it took 24 hours to reinvigorate David’s waning comics-making libido…24-hour comics, that is. Now a renaissance man cartoonist/illustrator, David has returned to the form with various 24-hour comics, such as the ones published by Top Shelf in 2008’s Twenty-Four Times Two. A sequel to PERSPECTIVE! is in the works.
On a personal note, DAVID CHELSEA IN LOVE was a big influence on the most recent of my EL GATO luchador comics, THE NINE LOVES OF EL GATO, CRIME MANGLER. I remember picking up the individual issues of DAVID CHELSEA IN LOVE in the early 1990s (before they were collected in tpb form) off the shelf at L.A.’s Golden Apple Comics, and tripping out over the whole concept of how David was the lothario hero of his own series. The illustrations were elegant and wonderfully anachronistic, with hot-and-heavy sex montages rendered in a pointilist style. Despite the glut of (snarky and smarmy) autobio comics at the time, there was nothing like DAVID CHELSEA IN LOVE. It was quite a twist on what became a genre, and a class act at that.
A more extensive interview I’ve conducted with David on the topic of DAVID CHELSEA IN LOVE will appear next year in BACK ISSUE! Magazine (www.TwoMorrows.com).
In the meantime, here’s David’s two cents across four questions. 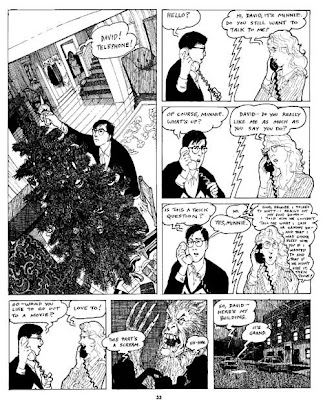 How did the S. Clay Wilson 24-Hour Comics benefit event at Cosmic Monkey comic book shop in Portland, Oregon, go over the weekend and what were the results in terms of attendance, work produced and money raised?

I'm still toting up my own pledges, but I think it's somewhere in the neighborhood of $1,000. For those who are interested in pledging, it's not too late: here's my latest blog post about it: http://dchelsea.com/wp/?p=184
I produced 24 pages on the nose, so pledges can be some multiple of that, like, say, $240, $480, $2400...Not tax deductible, but you do get a signed mini-comic of the story I drew.
Money raised by other people, I don't know about. There were about 20 people there, nearly all of them lasted the night, and I'd say about half produced the requisite 24 pages. Not all of them were working for Wilson; most seemed to be doing it to have new material to sell at the Stumptown Convention in Portland.
By the way, I’d like to thank Copic, which provided materials free for the event. Except for blue pencils, my story was drawn entirely on their paper using their drawing materials. 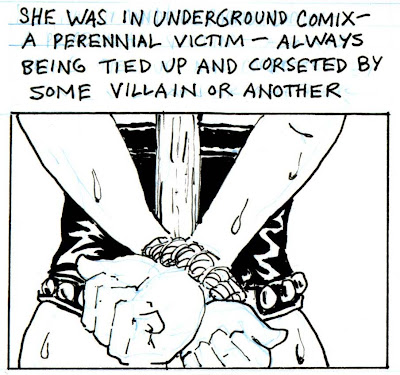 What is your connection to S. Clay Wilson which galvanized you to organize this effort after he suffered his brain-damaging accident?

We've never met, I'm just a fan, someone who read his stuff growing up, and I think he drew the best women of any of the ZAP! guys. I do know something about medical expenses. I broke my leg and needed surgery late last year, and even though I have decent coverage, the impact was financially uncomfortable; I can only imagine what it would have been if I had suffered a truly devastating injury like Wilson's. 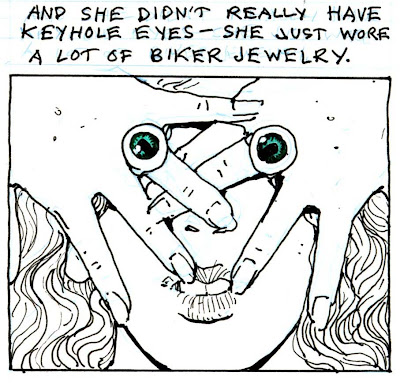 Can you tell us about the 24-hour comic which you created at this weekend's event and when it will be published or posted?

It's called "The Girl with Keyhole Eyes", and it's a series of reminiscences about various women I've known (mostly NOT old girlfriends). It mixes real stories with outright fabrications in the manner of a game l have played called "Two Truths And A Lie". It ends with a real groaner of a pun. I've posted the first three pages on Comics Lifestyle: 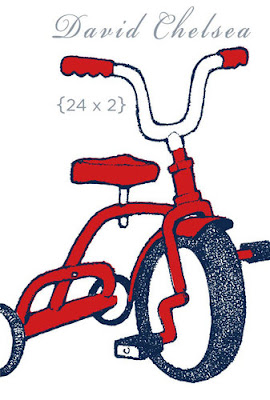 After all of the 24-hour comics you've created, is there a snowball's chance in hell that you will ever beat your record and produce a 23-hour comic?

LOL. I already have. This one qualifies; I finished my last page about an hour ahead of the goal and spent the remaining time schmoozing and reading other people's stories. I've done even better in the past; there was one story I wrapped up in something like 19 hours, which meant I was actually able to get a couple of hours sleep before breakfast. Indigo Kelleigh came to a 24-hour session at my house once and finished in 17 hours, which I found kind of amazing, but that's nothing compared to what a real pro can accomplish once he gets going. Last year, Jim Valentino came in to do the 24-hour event at Cosmic Monkey. He was finished and outta there in 10 hours.

Visit http://www.dchelsea.com/
Posted by Greenblatt the Great! at 10:58 AM