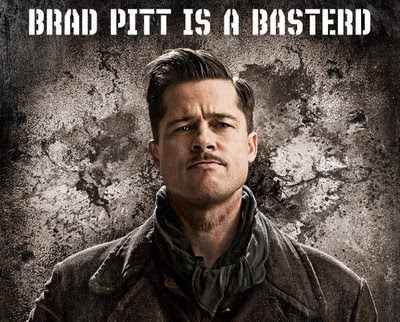 Well, well, well! Look who spent the weekend catching up on his movies from the past half-year!

FRIDAY NIGHT, I finally caught up with GRAN TORINO. I'm not the biggest fan of Clint Eastwood the Director. He paces his movies too slow and, in general, his Westerns are belabored (even UNFORGIVEN, a form of Western he ripped from Peckinpah, only not as good). But I was kind of looking forward to GRAN TORINO based on what I saw/heard, especially with Clint starring in the film. 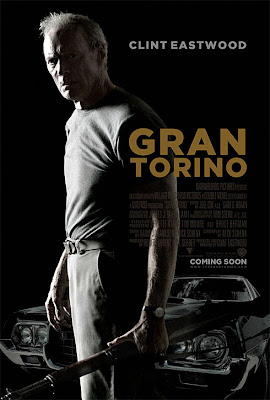 Sadly, this movie did not live up to snuff. Part of the problem for me was the amateurish actors in the supporting cast. The young actors were not so hot, a little too obvious. The other problem is that Clint is ancient, with a hoarse voice. Even when he's shouting, you can't goddamn hear him! I have to pump up the volume to 28 just to hear Clint whisper! Overall, the story is kind of predictable and melodramatic. The gang stuff didn't ring true, kind of Hollywood phony. It was hard to understand why the Asian thugs gave a damn about inducting the teen cousin into their crew....what was he, some kind of genius or something? And why did the priest care, even meddle so much? He was so persistent, he should've been an honorary member of the Asian gang. Then the priest and the other gang members could pester the cousin some more.

It was piled on a bit too thick. I think this would've made a better play than movie, with the Gran Torino car being a big symbol. It really felt like a play. This is not the worst movie, by any means. It's OK. It had some moments. The ending was symbolic. Ultimately, it's a big symbolic kind of enterprise but not very real life or convincing. But it's always comfort food to watch a movie starring Clint.

ON SUNDAY, I got in touch with my masculine side and my feminine side in the same day....AND BOTH SIDES WERE HAPPY! 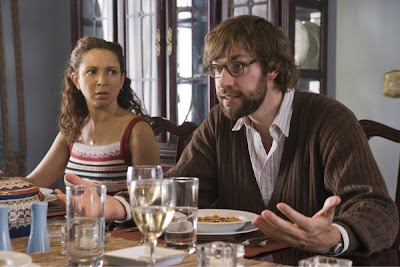 On Sunday evening, I watched AWAY WE GO and I enjoyed this character sketch, borderline chick flick, quirky romantic comedy. It's kind of like an art house rom-com. But it had some truths about life and relationships and the lead characters - Jim from THE OFFICE and Maya Rudolph - met some interesting characters along the way, including the guy who Amy Proehler likes on PARKS AND RECREATION, who plays Jim from THE OFFICE's brother. You know, it wallows a little in contempo arthouse romantic comedy cliches-----it's one of those movies with a GARDEN STATE-type emo soundtrack --- but it's ultimately a likable movies and I enjoyed the ride and the performances. The stroller scene was a highlight. 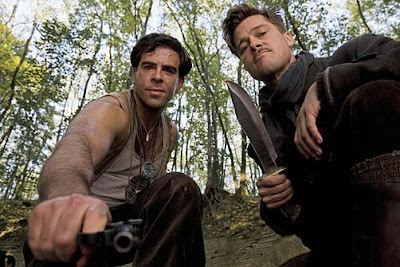 EARLIER THAT DAY, ON SUNDAY AFTERNOON, I manned up and saw INGLOURIOUS BASTERDS! Now, I have made a big deal in the past about how much I can not stand Tarantino's films and how indifferent I am to the charms of Movie Star Brad Pitt.

I don't have the energy right now to delve too deep into why stuff like RESERVOIR DOGS, PULP FICTION and KILL BILL PART 2 left me cold, but the short version is that I always felt that Tarantino was simultaneously very talented but very derivative and, ultimately, too 2-dimensional and silly to take too seriously. Too film-geeky, swiping from KISS ME DEADLY/REPO MAN, Shaw Bros., THE BRIDE WORE BLACK, BRING ME THE HEAD OF ALFREDO GARCIA (how DARE heeee!) and anything else that was not tied down to the floor. OK, we get it, he loves a lot of cool cult movies! But how about adding a few NEW words to my vocabulary?

This movie broke both streaks for me. It's probably the first Tarantino film I actually really enjoyed and looked forward to seeing based on the premise. Up till now, FIGHT CLUB was the only Brad Pitt performance that I could think of that I enjoyed somewhat. That all changed because Brad Pitt, with his ridiculous accent, totally owned his role. He's charismatic and he's kind of playing some kind of twist on a Clark Gable with some Warren Oates in there somewhere. You can tell he's having a blast with the role and I'll take this over CURIOUS CASE OF BABY BUTTONS any day! Ditto the other Basterds, including Ryan from THE OFFICE, and the guy who plays the SS villain baddie Landa.

I think what elevates this film over Tarantino's other films is that lack of reliance on junky pop culture references in his dialogue. Since this is a "period piece" (although by no means will this fantasy be confused for historical non-fiction or even historical fiction), Tarantino was forced to put his energy into the characters and plot twists and not glib dialogue.

INGLOURIOUS BASTERDS may not have a lot of depth either, but it's a much more fun ride and it reminded me a lot of the cartoony, WWII burlesque of THE INVADERS, as drawn by FRANK ROBBINS!

It's a different kind of movie than anything out there this year. I like the way Tarantino paced this one, including the slow, meticulous build up of the opening chapter. Very suspenseful. Their were many moments where it got tense and you're waiting for the other shoe to drop and it's eating at you, like you're watching a horror film.

Overall, it has a dynamic-looking visual aesthetic and I was really in the mood for this kind of film. I hear this is an in-title-only remake of the '78 Italian flick INGLORIOUS BASTARDS. At least he didn't swipe too much from it. He seriously needs to stop paying tribute to his favorite movies in his films and start creating new stuff. I hope Tarantino can continue making more films like this, in which he relies more on his own imagination, and less like the rest.
Posted by Greenblatt the Great! at 7:21 PM