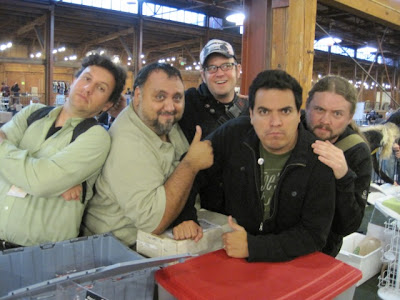 Contrary to the ALTERNATIVE PRESS EXPO of 2008---across a weekend hit by the pagan, Satanic and biblical plagues of a weekend that included Halloween, Day of the Dead, and a bad rainstorm---this weekend's APE 2009 was a resounding success. Bullion and gold doubloons for all, mateys!

Last year's trip, in which myself, JAVIER HERNANDEZ ("El Muerto, Aztec Zombie") and TED SEKO ("Attack of the Superonsters") traveled up to San Francisco for the best independent comic book convention west of the Mississippi, this year's trip included Jav and me and a talented man new to the experience: animator JIM LUJAN. In fact, I have "The Luge" to thank for the photos on this blog (Thanks, Luge!). Having Jim join us was a great thing because, in a way, we were seeing the convention through the fresh eyes of his enthusiasm and discovery of all things APE! Not that I was jaded or anything....are you kidding? Any excuse to run around the Bay Area and hit some of those restaurant spots....and the convention itself is amazing. To see all of that talent under one room at the Concourse was breath-taking...especially when I was staring at my own booth! 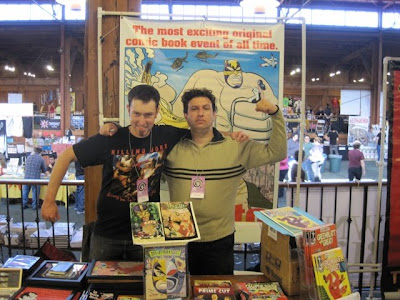 Speaking of which, here's me and my table partner, SETH WEBER, founder of ALARMING PRESS, who had some sweet success with his JON CLARK fanzines and ZOMBIE CHRIST DVDs (don't ask, just buy). Unfortunately, the now-LA-based/former Oregonian Clark could not make it to the show this year so we represented!

Note the EL GATO, CRIME MANGLER banner behind me? Well, now that my work has veered deeper into the funny zone, a new banner will appear for 2010. Not that I'm completely abandoning the El Gato series...a new book is currently in the works for next summer.

The road to APE in all earnestness began in, of all places, Burbank, where Jav, Jim and I caught up with last year's APEr, Ted Seko, for lunch on our way out to the Grapevine. Yes, we 5'd it all the way up California!

At this high-end restaurant which shall remain McNameless, we caught up with Ted and it was there where we were all introduced to Javier's latest El Muerto book, the Japanese candy-coated MANGA MUERTO. 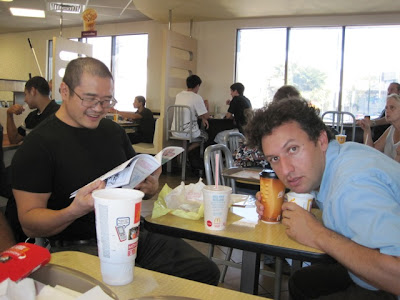 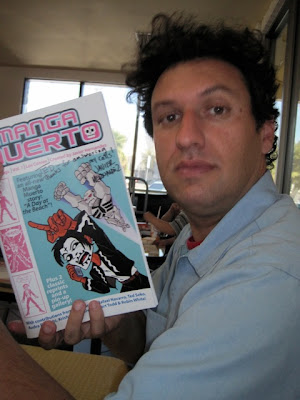 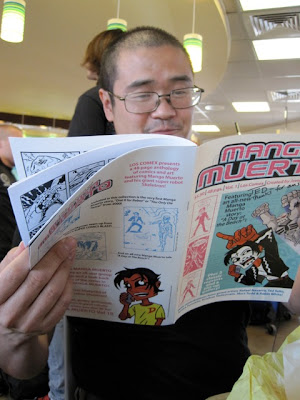 We all took turns giving the new book our official endorsement. And why not? 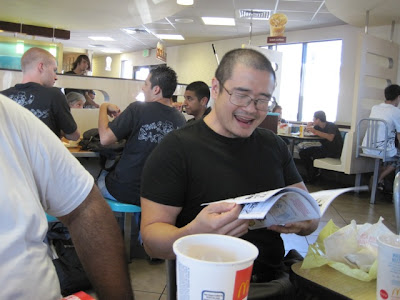 Really, there's nothing better to do on a Friday afternoon in Burbank....

Ted had to get back to work, where he creates some of the funniest animated cartoons on cable. We wished he could have joined us like last year, but what? You want us to make millions of American children cry when they turn on their television sets and SOMEBODY has fallen behind on their animation? So we waved goodbye to Ted and, after a few tears, promptly forgot about him for the rest of the weekend.

After a conversation-filled Friday drive up (in which I lost an impromptu movie trivia contest) and a Friday night at the Mission and a rift that caused much dissension and nearly ripped our friendships apart (whether or not to eat at El Farlito vs. another tacqueria on that same block...Jim and I sided with the former and, looking at the size and judging the tastiness of the burritos we ordered, we think we won this one...), we got to the hotel in a quiet town just outside San Francisco and caught our Z's to get up early on Saturday morning. 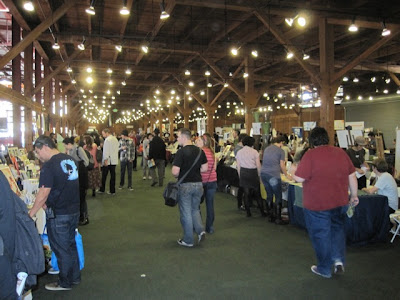 The next day, we arrived at the Concourse and set up at APE, where there was no lack of people to inspire the name of this convention! 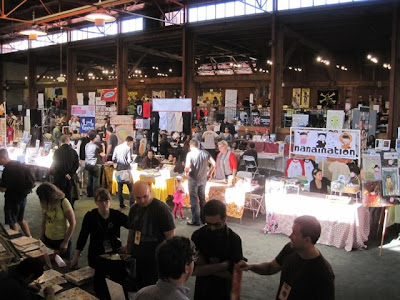 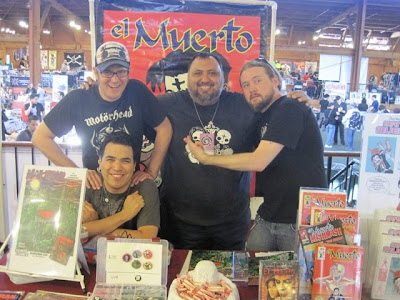 Big Jim Lujan caught up with his buddies, Portland-based cartoonists KEVIN CROSS and MARK RUDOLPH, my table neighbors to my right (it was too convenient that my table mate, Seth, also lived in Portland). On my left was Javier to keep the laughs coming a-plenty in-between the comic book sales. 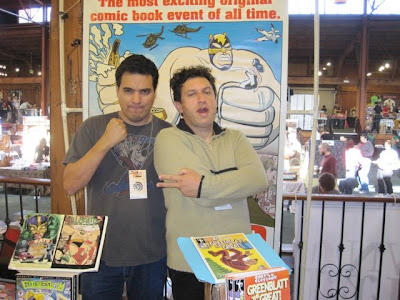 In-between brisk sales, the Luge and I took every opportunity to thwart many a papparazzi with our bad-ass vintage B-Boy poses. They went over very well, as you can see, by the amount of women clamoring to get to us. 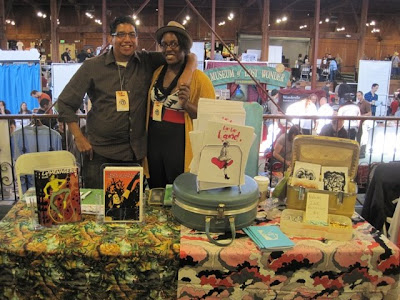 The real romance was going on all the way down the row at BERNYCE TALLEY's booth, where Bernie was sketching like a madwoman while her boyfriend RICARDO kept her company. That went over very well, as you can see, by the amount of people from OUR tables clamoring to get to THEM! 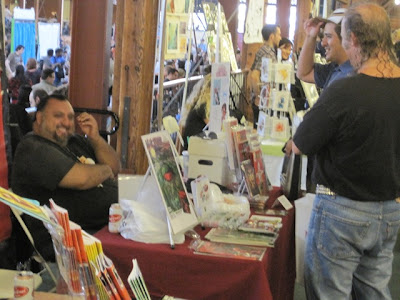 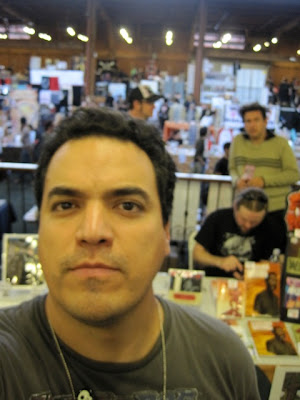 Here's a nice shot of The Luge, with me lounging in the background. Note I'm wearing the very three-striped sweater I wear in my new high-octane autobiographical spy thriller, "The Secret Double Life of Michael Aushenker" (as seen in my new book, CARTOON FLOPHOUSE # 2). 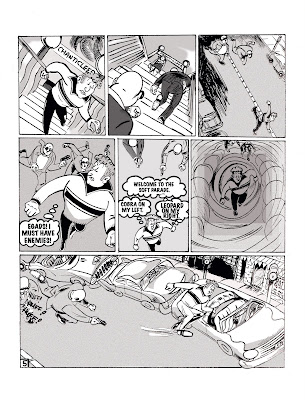 Listen, I might as well. That Concourse place is like one mammoth ski chalet, and here, I appear ready to lounge around and nurse a hot mug of cocoa with little marshmallows over by the fire. 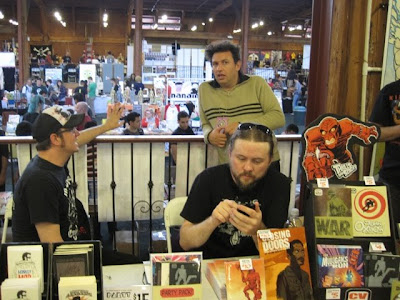 More downtime at the ski lodge. The guys play a game of poker as we sit out the latest snowfall. It's like a scene from THE DOUBLE MAN with YUL BRYNNER! Somebody page Max Gruener! 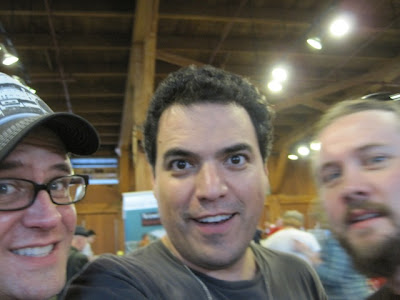 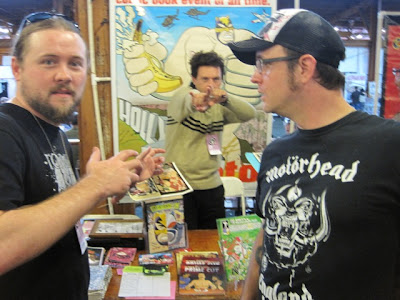 I love to Dr. Strange my way out of awkward situations. If you gesture in such a way as to summon the Eye of Agamotto and conjure up the hellhounds of Dorammu, you can get out of any goddam fix! 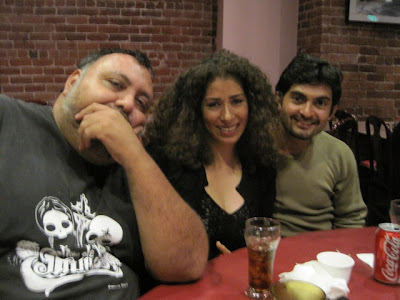 After the show on Saturday night, we all went to Henry Hunan's in downtown, a couple blocks from the CARTOON ART MUSEUM. There, Javier invited his two cousins and proved that the good looks run in the family (not run FROM the family as we previously thought....). Monica and Juan were a fun addition to our meal that night....to be exact, about $35 worth of "addition." 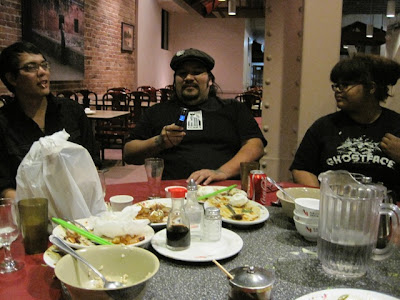 Rob, Johnny and Melissa from the Corona-based HIGH TOWER COMICS joined us at our table. With the amount of plates heaped onto our Lazy Susan, let me tell ya....bitch done got lazier!

What would Henry do without APE, though? There were only three large parties in the entire restaurant and they were all APErs....what the hell happens on a typical Saturday night? 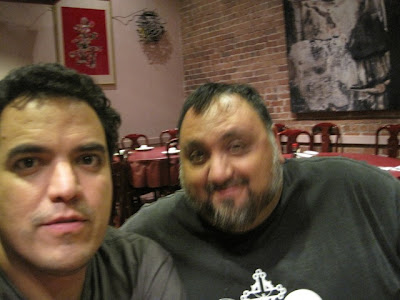 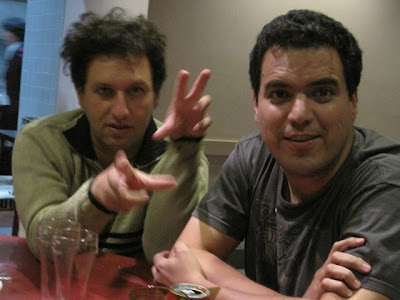 By this point of the evening, Big Jim began to sound like Seinfeld's mother: "Alright! Oy, vey! Enough with the Dr. Strange already! If you keep doing that, you're going to go blind!"

He had a good point. Too bad it was on his head. 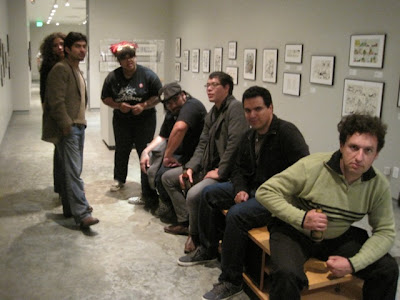 After that big heavy meal, we took a digestive walk (about half a block....and in my case, I was rolled over like a wine barrel) over to the Cartoon Art Museum, where the APE party was going on. I was still frozen in my hot cocoa mug-drinking mode. Perhaps someone had opened a window up back at the chalet?

I have to admit, the CAM party fell short of the Wonder Con 2009 party there, which was hard to top when you had the great permanent exhibit, plus a Gene Colan show, Dave Gibbons' Watchmen art, and 25 years of Usagi Yojimbo up on the walls (and Mr. Gibbons, Mr. Sakai and Steve Leialoha in the house).

But the Spain Rodriguez originals and the Disney's Nine Old Men sketches, along with some truly funny webcomics, was still nothing to shake a praying mantis at! 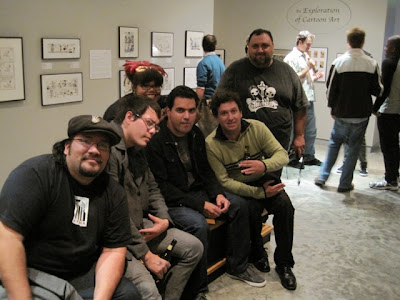 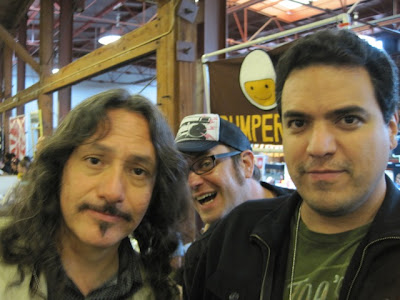 Somewhere along Sunday, we caught up with RAFAEL NAVARRO of SONAMBULO comics (or as we like to call him since SGV, "Raffles" Navarro). Let's put this delicately...if his face were a billboard, it'd be advertising the party at Isotope that went on the night before!

By the time we posed for this mighty group shot at the end of the weekend, we were ready to pack it up and call it an APE. But there was one minute left until closing. So we kept up the posturing for 60 tense seconds..... 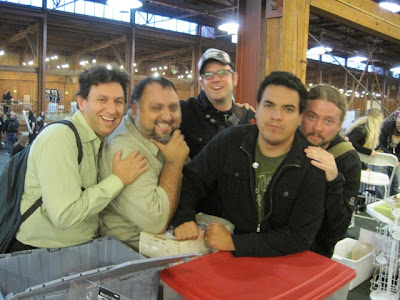 Then the convention was over and we could finally let down our guard....Phew! OK, that's it, nuthin' to see here anymore. Back to your fox holes, you gold-brickers! We scattered, like raccoons caught picking fishbones out of garbage cans, back to L.A. by early morning.
Posted by Greenblatt the Great! at 7:17 PM