In the last year or two, ROB IMES inherited the long-running STEVE DITKO fanzine DITKOMANIA, and as its new editor-in-chief, he's been running with it---and running it----with much gusto. It's no easy feat constantly coming up with new material and new ways of analyzing the work of the enigmatic artist and co-creator of THE AMAZING SPIDER-MAN and DR. STRANGE, who is a known recluse and reluctant interview subject, but somehow, Rob, with a talented team of writers and artists, has produced new angles, found lost work, spotlighted the obscure or the nearly forgotten, and, above all, paid tribute to this comic book master, even as the magazine's namesake actively distances himself from and expresses his disdain for his diehard fans.

Full disclosure: This year, I became a contributor to DITKOMANIA in the form of my regular DITKOTOMY column, and I've been lucky enough to have artist WINSTON BLAKELY and my pal, JAVIER HERNANDEZ, illustrate said columns with their fun art. Both artists consider Ditko big influences on their own unique work.

All of the info to reach Rob and/or to order issues of DITKOMANIA, including the terrific just-released issue, DM # 75, which focuses on Ditko's work in 1975 (Atlas' DESTRUCTOR and my article on TIGER-MAN, and DC's STALKER, among others), can be found right here:

If you're a Ditko fan and you're NOT reading DITKOMANIA, well, what can I say? TSK! TSK!

And now, ladels and gingerbread men, here are four questions for ROB IMES.......

**Why are you such a diehard fan of Steve Ditko and what aspects of his art have captured your imagination?

I like a few things: the charm of the cartooning, the personality that shines through, the stylish and sleek depictions (cool lighting effects with backlit figures, etc.), and the short-story inclination in Ditko’s work.

I should probably explain the latter. I’m a fan of short stories. Whenever I look at prose books, I’m drawn to anthologies, maybe because I like the idea of reading a whole story in a short amount of time, or the amount of variety inherent in short-story collections. Never-ending 22-page continuing stories can be tiresome; and even moreso when it is assumed that this style is the only way to do a comic. Ditko shows that you can tell a satisfying, memorable story in 5 pages, and even 1 or 2 pages! One of my all-time favorite Ditko stories is “Social Justice” in MURDER #3, a 2-pager which combines Ditko’s philosophy with his humor. Whether I agree with the viewpoint of Ditko’s “Social Justice” has never been a factor in my enjoyment of the story – I love it because it’s such a wonderfully fun read.

Although the first Ditko stuff that I ever read was his Marvel work, by age 13 to 14, I was getting tired of Marvel formula (those 22-page continuing stories) and began checking out the pre-Marvel short stories that appeared in their 1970s reprints like “Weird Wonder Tales,” the 1970s Charlton ghost comics (both reprints in then-current Charlton titles as well as the back issues), the 1950s stuff that Charlton was occasionally reprinting in 1984 (“Deep in the Mountains” was a favorite of mine), The Fly #5-8 (from Archie Adventure, four of my favorite comics, which resembled old-time comics in its use of a back-up strip and gag page), and by 1985, when I bought “Charlton Action Featuring Static,” his unique philosophical comics. Sometimes it felt like I was the only one reading these comics at the time (I didn’t buy an issue of DM until 1992), which perhaps made me feel closer to them, like I had “discovered” these gems lurking on the
stands next to “Secret Wars” and “New Mutants.” This diverse and interesting body of work showed me that Ditko was a lot more than just Spider-Man and Doctor Strange. 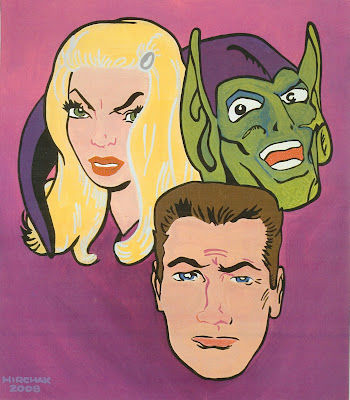 **What has been the biggest challenge since taking over the editorial duties of the DITKOMANIA fanzine?

The biggest challenge has been having enough money on hand to print up and mail out the issues. Although DM does have several paid subscribers, many of the copies are free to contributors, potential contributors, reviewers, industry folks, and people I just think are cool. I actually prefer to receive submissions instead of money – it makes it easier to put together each issue when I have a lot of submissions on hand – but DM could come out more frequently, and more 2nd Printings could be done, if I had more money to make that happen. As it is, I have to make sure that I budget myself to make sure that I have enough money to put out the issues during any month that an issue of DM is supposed to come out.

Probably the second biggest challenge is the sheer physical work of folding the pages, stapling the issues, all that boring time-consuming labor. It can be a very exhausting task, and sometimes risks sucking some of the fun out of the experience. A couple issues ago, I was so intent on getting the issue out ASAP that I stayed up all night without sleep, folding pages non-stop for hours, to get it done and ready to mail out the next day. All this on a “day off” from work. Some of my days off work aren’t really days off, but days devoted to DM.

A third big challenge has been the creation of the issue itself (before being printed), although this is usually a fun challenge. The first issue of the DM revival (#64) was the hardest, because I had to do most of the work on it all by myself (writing most of the articles, drawing most of the illustrations, etc). And at the time, I didn’t have even have a computer! DM #64-65 were typed up on somebody else’s computer and printer, over at their house. I remember typing up the Speedball stuff in #64 for like seven hours straight over there, like a day’s work at a real job. Things have gone much smoother since I got a working computer, a printer-scanner-copier, and finally (in November 2008) home access to the internet. But things run much smoother now that so many others have been contributing.

A related challenge in the creation of each issue is my own limited access to Ditko material. I’m a cheapskate and don’t own any original 1950s Ditko comics, and very few 1960s Ditko comics – most of that stuff I have in reprinted form, not the original comics. The current issue of DM is about the Charlton heroine Nightshade, which posed a little problem since the only Nightshade appearance I have is a 1970s reprint of Captain Atom #85. Fortunately, my contributors came to my rescue and provided me with examples of her appearances to accompany the article. 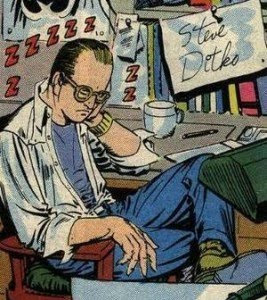 **Were you truly satisfied with the final showdown between the Creeper and Proteus in BEWARE THE CREEPER # 6 and why?

I don’t have that issue. I do have the 5 previous issues of The Creeper (and a reprint of his first appearance in Showcase), but haven’t really read them. Like I said, even though I publish Ditkomania, I don’t consider myself a Ditko expert. I’m not even sure if I’ve actually even read all of his Spider-Man comics, since I have them all in assorted reprint form. I know that I haven’t read all of his Dr. Strange comics. (I do have a few of those in their original comics… 1960s Strange Tales comics aren’t as expensive to acquire as 1960s ASM.) If someone were to submit an article about The Creeper, I’d probably have to get out those Creeper comics and read them. And that would be part of the fun for me, learning more about the character myself! 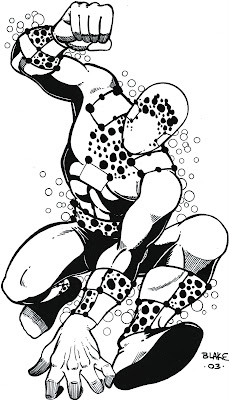 If I had to choose, then Dove. I don’t have their first appearance in Showcase (I have bid on it on eBay once, though, and lost). I have read Hawk & Dove #1-2 and enjoyed those issues. I liked #2 the best because I thought it portrayed Dove in an admirable manner, the way he tried to stop the villain in a non-violent manner. I’m a big fan of Captain America and one of my favorite Cap issues was #163 wherein a pacifist character, Dave Cox, refused to return violence against those who were committing violence against him. I tend to think a non-violent approach is the enlightened view, although of course sometimes it may be necessary to use force to stop those who mean harm against others.


Art credits: Cover of DM#75 by Winston Blakely. Static by Larry Blake. Painting (based on the cover of DM #35 he drew in 1993) and Green Goblin montage by Martin Hirchak. The Nightshade article that I mention in my interview is the one in DM #72.

Since that time (when the interview was conducted), I did read all of the Ditko-drawn Creeper comics in my collection, in preparation for DM #74, the "Ditko at DC" issue. I still don't have Creeper #6, though, so I don't know how that got resolved. I suspect that Ditko intended Proteus to really be Jack Ryder's roommate Rip. (Rip could have been merely pretending to be frozen still in #4 & 5.)

Also, I forgot to mention that my personal website now is http://rimes12.tripod.com since Geocities is closing down this month.

I've posted links into the main text of the article and I've updated the site as well.

(But I still recommend you read the issue, at least half of it is well-drawn!)

I have to be honest, Rob, DM#75 is an education for me because STALKER somehow escaped my notice. I can't believe it was out there, with Wally Wood on inks. I've got to find those four issues! It's my mission now!

I DID find the Black Lightning back-up story that Ditko drew and Jerry Ordway inked in OUTSIDERS # 13, but I didn't buy it because it appeared that Ditko must have very, VERY loosely laid it out. It looked more Ordway than Ditko, I couldn't justify buying it. Rob, any thoughts on that story?

Not sure if I have that Black Lightning story or not... I do know that I've not read it. (I have waaay more comics than I've read.)