My Top 5 Funnybook Cartoonists of All Time!

There's nothing more shallow and self-indulgent than compiling lists, which all but squeeze the oxygen out of the subject you're paying homage to. But I'm not about to let that stop me now!

Here are my Top 5 all-time favorite humor cartoonists....although the last three entries, I stumbled onto in recent years.

This is the iconic strip for me, although I was more influenced by and a greater fan of the POPEYE Fleischer Bros. cartoons, which refined and defined Popeye the Sailor as I know it. Above is the first appearance of Popeye in 1929.

I've learned that these Belgians were paying tribute to Bill Griffith's ZIPPY THE PINHEAD when they created Cowboy Henk. Ironically, I can not stand ZIPPY THE PINHEAD, which I always found too wordy, political and topical to enjoy its inherent absurdism. By keeping things simple and not wasting time with the topical and political themes, COWBOY HENK knows how to get silly! It's too bad that the Fantagraphics collection of HENK strips is not the strip at its best. 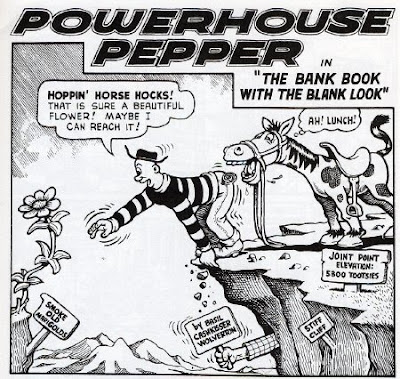 Obviously a riff on Popeye, Wolverton had just about the best character designs on the planet. His work is just beautiful to behold, not to mention very witty and entertaining. Fantagraphics put out a complete collection of the Powerhouse Pepper strips, which are a lot of fun. As is the catalogue book released to coincide with that amazing exhibit I caught in Orange County back in 2007. 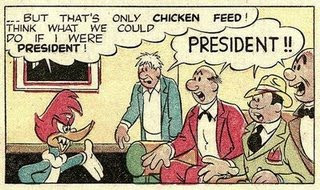 I'm just beginning to learn about this guy, who also drew NANCY and WOODY WOODPECKER comic books. His drawing style appears so effortless and fluid, as if they were just conceived, not created. I'm looking forward to reading more of his work, which I'm behind on. Still haven't got those D/Q collections yet. 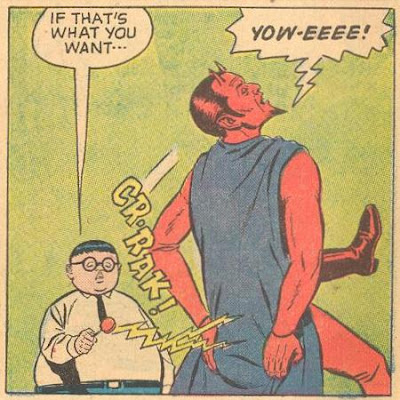 This is just the archetypal demented comic book series. Very offbeat and the art is great. I'm delighted that Dark Horse archived this series, these books are not to be missed.

As long as we're talking humor comics, I also dig David Boswell, who gave us REID FLEMING, WORLD'S TOUGHEST MILKMAN, Charles Burns, creator of EL BORBAH and THE BLACK HOLE, and, most recently, books by JASON, such as I KILLED ADOLPH HITLER and THE LAST MUSKETEER. Not sure if this fits the "humor" theme altogether, but Tezuka's BLACK JACK is brilliant. Fun stuff!
Posted by Greenblatt the Great! at 8:02 PM

Martin and Sergio are definitely cartoonists I read as a kid.

Tish Tash is the great Frank Tashlin, director of THE GIRL CAN'T HELP IT, SON OF PALEFACE, and many a Jerry Lewis movie. But before he made great cartoony, live-action features, he was a cartoonist and Warner Bros. animator.

Also, you mentioned in our phone conversation the great Syd Hoff, too! Gag cartoonist extraordinaire (even though he's more famous for his children's books). Hoff is not one to be overlooked.

I'm not as familiar with Abner Dean, but the rest are list-worthy and definitely among the all-time greatest in my opinion as well. Thank you!

Thanks for your list, Shawn, I agree: Sergio definitely ranks among the all-time greats. I've enjoyed all of the cartoonists on your list, but I was thinking comic books, not comic strips, which is why they're not on my list. If I were going for syndicated strips, there's a long list of folks I'd add to that, from Ernie Bushmiller to the creator of "The Little King" and of course stuff like "The Far Side" and Matt Groening's "Life in Hell" back in the day.

Carl Barks and Jeff Smith do comic books, but I've never read an issue of Smith's "Bone" to this day. Carl Barks is definitely a master of the duck funnybook, feather or not I read his stuff.