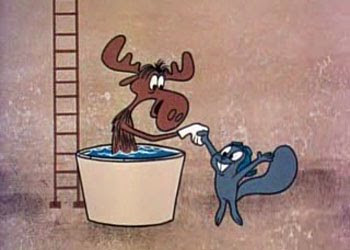 Even though Ward had a show or two before it, Rocky & Bullwinkle really caught on and it ushered in the age of TV cartoons; a precursor to Hanna-Barbara. Not to mention it was the hippest cartoon on Earth--loaded with in-jokes and made charming by bare-bones limited animation--and its writers went on to script stuff like "Mary Tyler Moore." Basically, stuff aimed at adults disguised as children's entertainment. The closest equivalent these days might be "SpongeBob SquarePants."

There's an article from a Midwest newspaper here in which they interview Ward's daughter, Tiffany, and reveal at the end that DreamWorks is planning a Sherman & Peabody feature cartoon for 2012 (good luck trying to do justice to that one....). And here's a decently drawn Rocky & Bullwinkle comic book that some nerd posted up in honor of the anniversary. 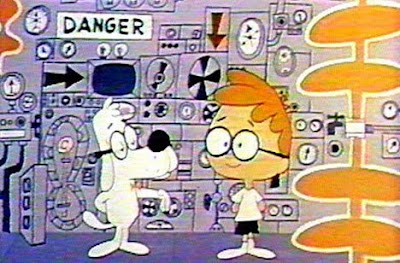 Look, I hate to be such a cynic, but it's hard to find clever cartoons on TV. But when it works, I'm the first one to shout about that. Past posts here have raved about "Batman: Brave & the Bold" and I don't doubt that there aren't more toons on the level of "SpongeBob." But Saturday morning cartoons are so junky these days, I can't get my Cap'n Crunch on watching 'em. I usually channel surf between the televangelists and infomercials, watch two minutes of City Council channel, and give up. Saturday mornings really suck.

I'm sorry if this is the most humorless, serious and dire post I've ever posted in the 25 years I've been running the CARTOON FLOPHOUSE blog (it's too bad Ward isn't around to write it). But you'd be miserable too if you had to eat your Honey Nut Cheerios while channel-surfing. It might create ulcers.
Posted by Greenblatt the Great! at 6:34 AM

You're right, Mike.
I grew up on THE BULLWINKLE SHOW as it was known in syndication in the '60s and LOVED IT!
I loved the whole show, but DUDLEY DO-RIGHT was a special favorite after the two main chapters of Rocky and Bullwinkle's misadventures with Natasha and Boris just crackin' me up.
Ward and partner Bill Scott never condescended to the kids or adults who watched their stuff. Their sensahumors were great, and I'm getting some of the jokes NOW that were over my head when I was a kiddie.
That kinda stuff is sorely missed...and it's sad kiddies TODAY don't have anything NEW like that.
Laaaaaaaaaater,
= Jerry

I really love cartoon althought im not a child i think the cartoon are very entertainment. Now a day the animation are wonderful. I always enjoy read about every think, actually once i found costa rica investment opportunities an interesting webside and i wanted to share it with you, like you share with me the wonderful information contained in this blog.