Not Quite Classic: RICHIE RICH & NEW KIDS ON THE BLOCK 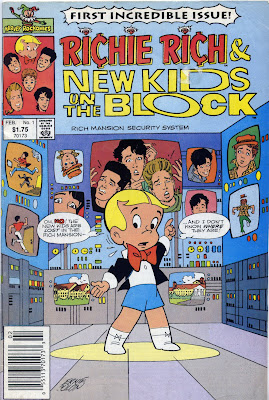 I was looking at classic comic book covers online and I somehow stumbled onto these doozies. Now I was never the most attentive Harvey Comics reader, so I somehow missed this SERIES (yes, series, not just a special, evidently) when it came out. The artist, Ernie Colon, is a fun artist, by the way, who has contributed to Marvel, DC and Atlas.

I can only assume that this came out in the early 90s or whenever it was that New Kids was consuming my little sister's every thought (she dragged my dad to a New Kids concert and he came out of it with his ears ringing from all of the shrieking 14-year-old girls). 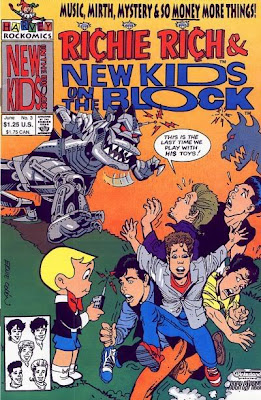 As cheesy and transparently trend-hopping as these comics are (hey, it's Richie Rich, so no shame in making money off of the latest boy band, right?), this is one of the things I find most charming about comic books in general: no, not boy-band tie-ins, I mean the randomness. It's only when they are predictable that comics are boring and disposable (and "so money" of mainstream comics today are!)
Posted by Greenblatt the Great! at 9:06 AM