March into your local shop and get # 37, YOU G*DD*M GOLD-BRICKERS! 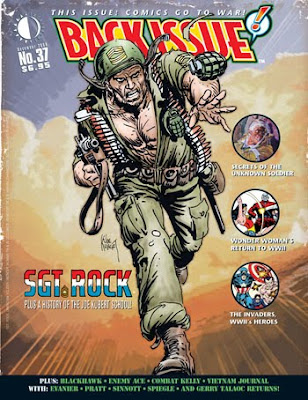 BACK ISSUE # 37 hits the shops today. The theme: COMICS GO TO WAR!

I've never been a big WWII comics buff growing up, but in recent years, two WWII series have captured my fancy, and I got to write about both of them for this issue: COMBAT KELLY AND HIS DEADLY DOZEN....and THE UNKNOWN SOLDIER.

COMBAT KELLY only lasted 9 issues, but what 9 issues they are. Written by Gary Friedrich, a master of the WWII comic, and drawn beautifully primitively by Dick Ayers, these 9 issues are a lot of fun, although nothing prepared me for the balls-out finale of this quickly canceled series went out. Trust me, you've never read a final issue like COMBAT KELLY # 9. It's a Comics Code-defying, bad-ass, hardcore classic that I guess they got away with because no one was paying attention!

THE UNKNOWN SOLDIER is the long-running series created by Joe Kubert (BI#37's cover artist, who did his rendition of his most famous character, future movie star Sgt.Rock), who kicked off the series. Great concept, great character. Sam Raimi's fun 1990 flick DARKMAN definitely put an urban spin on this creation. UNKNOWN SOLDIER included some stories written by one of my favorite artists, Frank Robbins (sadly not drawn by him), but the series really got interesting for me when Filipino artist GERRY TALAOC, a great disciple of the Robbins style, began to illustrate the book with David Micheline writing it. That's when this series took off for me, as I love Talaoc's quasi-cartoony art. And the grand adventure of this article was my worldwide trek (by Internet) to track down Talaoc, who had recently relocated to America (ironically, he had never been to America during his heyday for DC and Marvel, as he worked from his native Quezon City). Talaoc wound up contributing a new, painted piece of Unknown Soldier art just for my article. The painting is glorious. Talaoc is the man!

Get this issue at the store or through the TwoMorrows' Web site, it's a doozy!
Posted by Greenblatt the Great! at 6:48 AM