Today marks the 30th anniversary of one of the greatest sequels ever made (and at least the second best STAR WARS movie, some say THE best....)------THE EMPIRE STRIKES BACK.

I remember seeing the originally STAR WARS with my dad at Seaview Theaters in Brooklyn. That was 1977. In 1979, we moved to Los Angeles and somehow my dad had befriended someone with film industry ties. Or a good enough tie to land us an advance studio screening to EMPIRE a week before it opened nationwide.

You can imagine my excitement of seeing the sequel to what I thought at the time was one of the greatest films ever (I also really loved 1978's SUPERMAN) on the lot of the very studio that made it----a week before the rest of the country, which was brimming with anticipation, of course. STAR WARS was the highest-grossing film of all time (a title broken by TITANIC). Wow, seeing a preview of EMPIRE.....Especially EMPIRE with its crazy revelations and wonderfully oblique, resolved yet open-ended ending (little did we know that more Muppets were on the horizon [sorry, Yoda]...)

Of course, EMPIRE, with its brilliant visual set pieces, more than lived up to my expectations. In retrospect, after seeing it a few times over the years, the Yoda stuff bogs down the film's pace, and I feel that overall nothing beats the original STAR WARS, which set everything up and which portrays Darth Vader at his most evil and mysterious. But EMPIRE still holds up. It's still one hell of a movie, and seeing it for the first time, you have no idea where it's all going so it's totally magical.

I can't think of many sequels that match or top the original. Some say GODFATHER II (but I personally way prefer the original). SUPERMAN II is terrific. THE DARK KNIGHT improves on BATMAN BEGINS. BILL AND TED'S BOGUS JOURNEY? No way. But EMPIRE definitely belongs in that rare club. As for STAR WARS, from RETURN OF THE JEDI on, it's like an Alpine slalom run....it's all downhill, folks! EMPIRE is one of the great sequels, perhaps the greatest sequel ever.

Cosmically, in adulthood, I wound up moving to Beverlywood just walking distance from 20th Century Fox, where from the Pico and Motor entrance, I could see the giant EMPIRE mural on one of the Fox buildings' wall every time I passed by. Such is the magic of life. 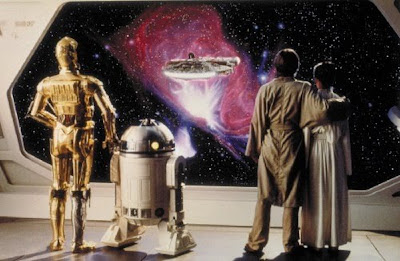 Posted by Greenblatt the Great! at 8:18 AM