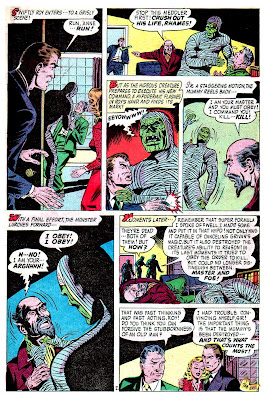 Ladies and gentleman, how about a nice round of applause for JACK SPARLING for the Mummy comics intro. You can read the entire comic here.

It's going to be a light convention year for me this year as I work on new comics and as we revamp the CARTOON FLOPHOUSE Website and brand to include Jose Cabrera and his CRYING MACHO MAN comics. The new Cartoon Flophouse comics company will be something akin to a two-man Harvey Comics for grown-ups, with crazy humor magazines featuring AWOL roosters (Jose's weasely little chicken Goya, my Clucky from UNSTOPPABLE ROGUES), scaredy cats (El Macho) and lots and lots of bald guys (Balding Berto, Greenblatt the Great! and Jose the Cabby).

But don't despair, I'll be signing books at the two big Cali conventions:

SAN DIEGO COMIC-CON (mid-July) -- No table this year, but I'll be a guest on Friday and Saturday at WILDCARD INK, home of Gumby Comics, with my pal, Wildcard Ink chieftain and DEAD AHEAD writer the mighty MEL SMITH running things like Capone ran Chicago (and leaving Geraldo Rivera in a vault!) It's always a fun time with Team Gumby, a lot of fun nonsense, not to mention those Gumby comics and merch sells like pancakes at a pancake convention inside an IHOP on a planet where its citizens only eat pancakes to survive (a poor analogy but you get my drift).

ALTERNATIVE PRESS EXPO, San Francisco (mid-October) -- For many reasons, APE is my favorite show to do. While Comic-Con is filled with not a moment's rest from the scale and excitement of a megashow (and with that comes a lot of incredible people I meet every year, pros and fans alike), APE is big enough to generate a sliver of that excitement but also intimate enough where you can focus on meeting people and having conversations that would be a quick blur at Comic-Con. If you've never been to APE, it's highly recommended. Plus: SF is a fun city to run around!

.....And more when we get there on the new CARTOON FLOPHOUSE comics company, your one-stop destination for the best humor comics!
Posted by Greenblatt the Great! at 7:30 AM