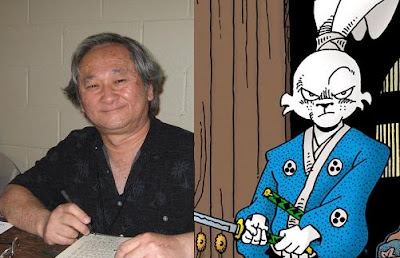 If my memory is intact, today is the birthday of cartoonist STAN SAKAI, creator of the long-running "funny animal" epic USAGI YOJIMBO. In fact, it's up for an Eagle Award in Great Britain for the category of best b/w American comic as we speak! (thanks, Nilskidoo, for the heads-up!)

Stan has been an acquaintance of mine for years via my membership at CAPS, the cartoonist society he's been a member of since it was founded in 1977. As a person, he's also one of the coolest and easiest-going cartoonists I've ever met, his wife and daughter are terrific, too. And his talent, his work ethic, and his independent vision in this superhero-saturated medium has always been an inspiration. In the repetitive world of mainstream comics, Stan is his own man. Because a diversity of genres and styles is always a good thing, we need more Stan Sakais (no, wait, not people copying Stan, I mean people as talented and distinctive in direction as him! Phew!)

For various reasons, I have not been able to make the monthly CAPS meetings of late (although I need to soon) so if Stan is out there somewhere in the blogosphere, I'll wish him a happy birthday from afar!

Have a fun one, Stan!
Posted by Greenblatt the Great! at 8:17 AM

Hey Michael, Stan is actually currently nominated for the Eagle Awards, under "Best Black and White American Comic Book" for Usagi. Here's the link, to spread the love: