Dr. Fate and Hawkman: It's about dang time! 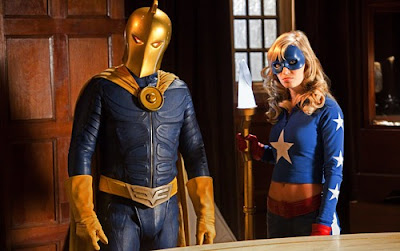 Dr. Fate and Hawkman and some dubious members of the Justice Society of America (Stargirl?? Huh??) finally reared their heads last night on the oft-delayed season premiere of SMALLVILLE. Wow, was that a long train coming.

The verdict: I could watch a weekly show about the badass Dr. Fate - they portrayed him just right. Hawkman, who is portrayed as some kind of badass, was a little iffy. But nice Martian Manhunter cameo, that was warped.

CW, give Dr. Fate his own show! Maybe he can have a girlfriend or a diary and appeal to the female teen viewers.
Posted by Greenblatt the Great! at 12:20 PM

Jerry Boyd writes:
It was a good show, Mike, despite the wooden acting of Superboy and some of the others. But DR. FATE hasn't been a hit since MORE FUN COMICS in the early 40s, and I doubt a TV-show will bring him back to his former glories. lol
They shoulda got a more muscular, taller actor to wear the outfit. That guy looked like a Comicon geek-attendee.
Laaaaaaaaater,
= Jerry