Happy Passover from Michael and The Circle Jerks!

Terrific night out Friday with founding Circle Jerks drummer Lucky Lehrer and guitarist Greg Hetson (also of Bad Religion) after a rare screening of Penelope Spheeris' THE DECLINE OF WESTERN CIVILIZATION at LACMA (WTF?!?!), at which Greg Hetson was among the panelists.

Here we are at Greenblatt's Deli on Sunset. The dinner conversation was hilariously peppered by background cameos of comedian Paul Rodriguez hauling bags of take-out to the Laugh Factory next door and either Jesus Christ or a guy dressed just like him.( Hey, even a nice Jewish boy like Jesus needs a hot bowl of matzoh ball soup during Passover....)

Here are the Circle Jerks at their most out of control from DECLINE, which Spheeris is aiming soon for a long-awaited DVD release.

What's amazing, as I learned from Lucky and Greg, is that the Jerks had only been together 3-4 months and they were a last minute add-on in DECLINE (perhaps why there's no interview with the group members in the movie). That, in itself....is pretty punk rock!

But the Circle Jerks are on point in DECLINE and gigs like this one at the now-defunct Fleetwood in Redondo Beach anticipated one of the tightest of all albums, GROUP SEX, later that year in 1980.

So cool to see DECLINE on a big screen again! It holds up very well and the panel afterwards was loose and fun. There was even an update on "Eugene" (today he's a folk singer...HAH!)

Here's the new logo for our charity comic for 2015: a biographical look at one of the most legendary and tragic of all guitar players, the late Mike Bloomfield.

For more information and updates on this book, of which all proceeds will go to drug rehabs for low-income addicts, visit the book's official site and please join the blog at radiosilencecomic.blogspot.com

Posted by Greenblatt the Great! at 11:26 AM No comments: 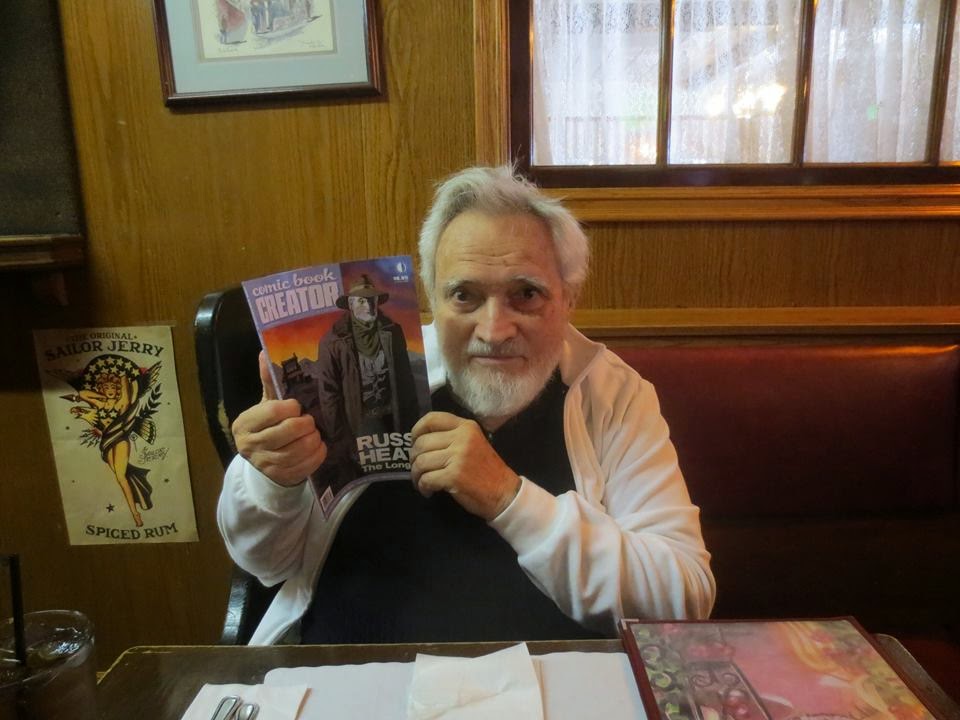 COMIC BOOK CREATOR #4 IS OUT!! As Associate Editor of COMIC BOOK CREATOR, I've contributed part I of II of my interview with DENYS COWAN, the first flesh-and-blood cartoonist I ever met in person (at the Ambassador Hotel's monthly comics convention when I was a teen). I also have my profile of MORT TODD & STEVE DITKO back when Todd was editor of Marvel's Ditko monster mag reprints and rock 'n' roll comics in the early 1990s.

Meanwhile, EDITOR JON B. COOKE did the cover story on the legendary RUSS HEATH, who got his copy today at Robin Hood Pub in Sherman Oaks courtesy of STEVE KRIOZERE. 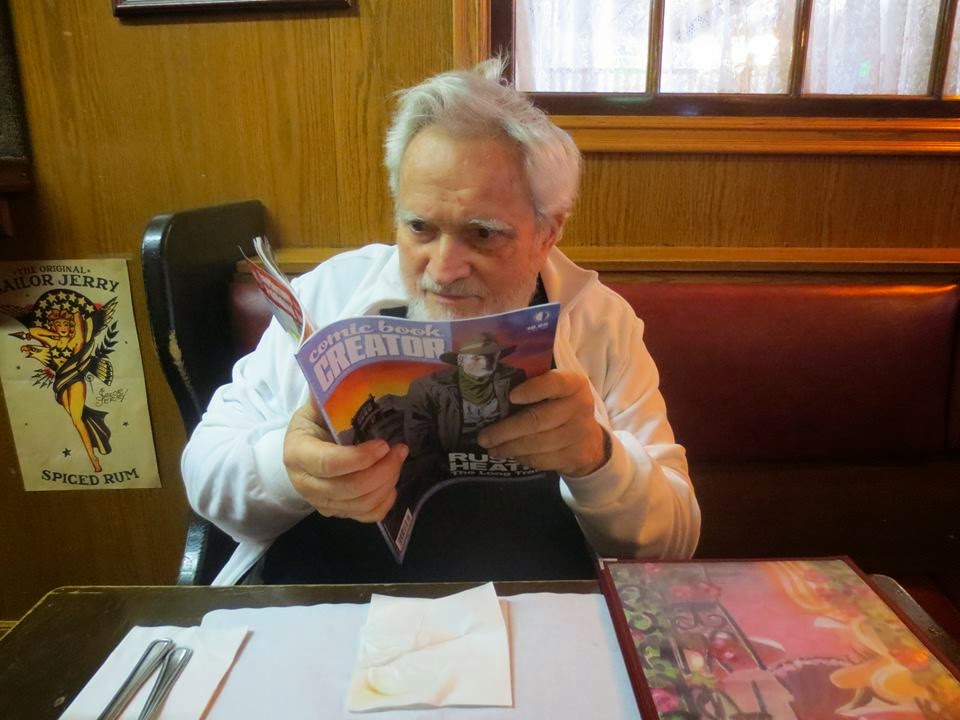 Posted by Greenblatt the Great! at 10:25 PM No comments:

Artist MARCUS COLLAR and I are working steadily on our three-issue comic book series GO, GENIUS, GO!, a workplace comedy set in techie corridor of  the artificially beautiful and sterile paradise that is Irvine, California.

Our series has everything you want (and don't want!) in an online company odyssey: raunchy jokes, office sex, and tech world-pretentious characters. Plus: feisty senior citizen retirees, of course! It's all explained in the books.

I wrote the series and Marcus is illustrating the books. Meanwhile, I'm creating the painted front and back covers for each issue.

Here's my front cover for GO, GENIUS, GO! #1, which will premier August 9 at Stocktoncon, where I will be a special guest. Issues #2 and 3 to follow at conventions and in comic book shops in fall 2014.

For updates, stay tuned at the Cartoon Flophouse Humor Comics Facebook page and via CartoonFlophouse.com 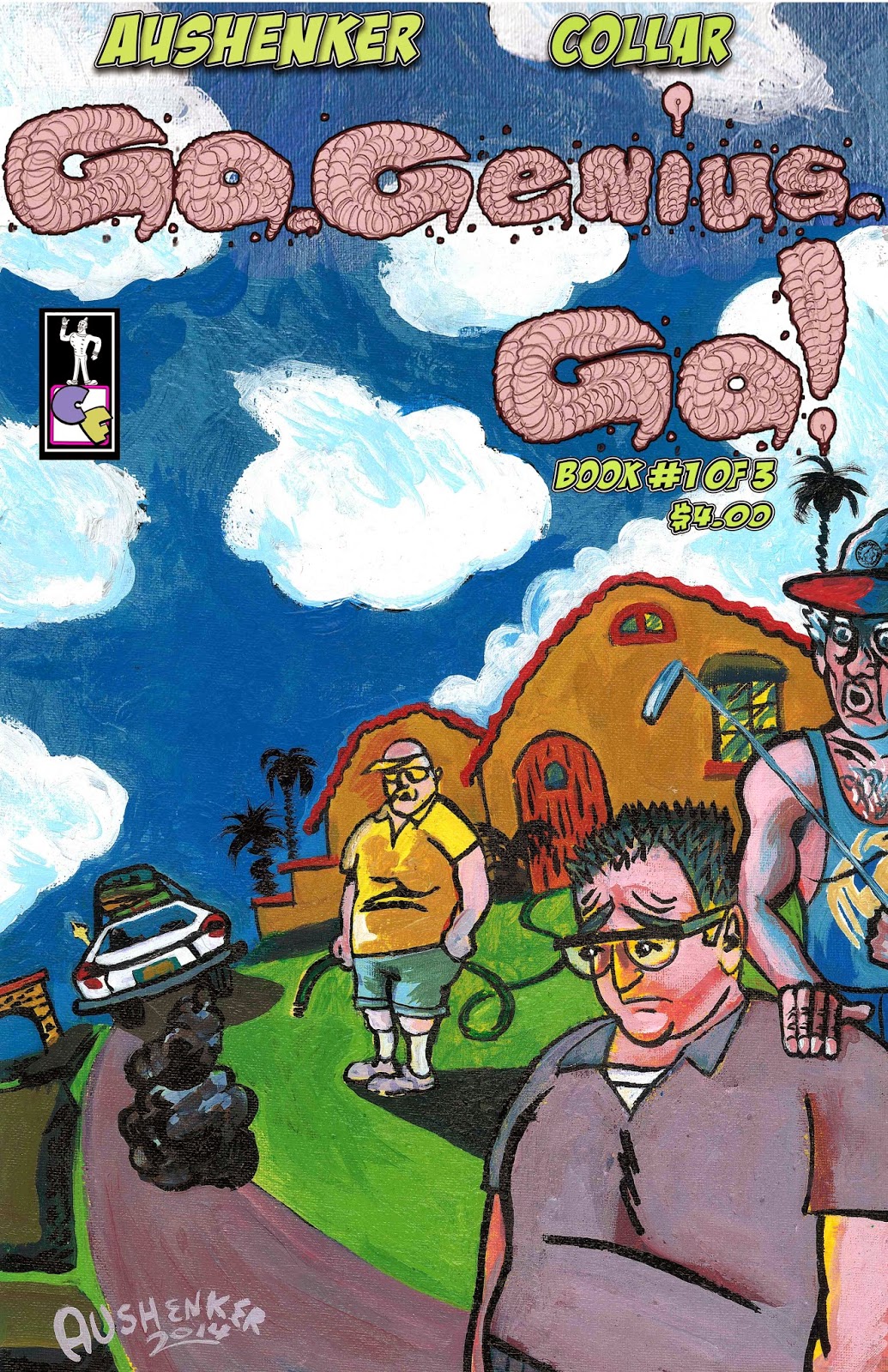 That's all for now. Signing off! BLEEORP!
Posted by Greenblatt the Great! at 8:38 AM No comments: