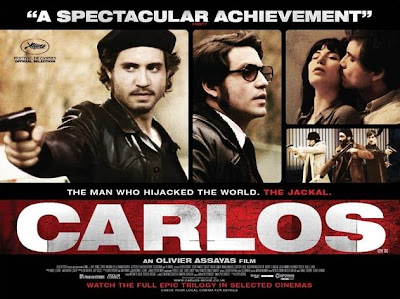 I'm not a stickler for intense dramatic features, but I love them when they're good (like FROZEN RIVER from a few years back...) and I really enjoy biopics and historical/period movies when they're well done...stuff like TALK TO ME and MILK come to mind.
One of the best I've seen in a long time (and admittedly, I'm only almost done watching it -- it's 5 1/2 hours long and I've been splitting it up over a few nights) is CARLOS, about the assassin Carlos the Jackal who terrorized Europe in the 1970s. This movie, originally a French miniseries, is very well-made, well-directed, well-paced and well-cast, with Edgar Ramirez in a breakout performance. He's perfect in this role and he's a strong actor...(By coincidence, he's profiled in this month's freebie Malibu magazine).
If you saw Steven Spielberg's MUNICH as I did and wondered why that well-cast movie looked great but was such a dud, the answer is in CARLOS. The director of this film should have been the guy behind MUNICH, it would've been a fast-paced thriller (as it should've been) instead of a politically correct polemic.
CARLOS is fearlessly done. It's one of those movies that puts you in an awkward place, making you accept an immoral character as your protagonist, but it's a fascinating thriller based loosely on the escapades of the infamous assassin I didn't know too much about before watching this movie. Anyway, a tour de force by all involved that I'm enjoying very much. I hope they keep giving Edgar Ramirez good roles, he's a terrific, charismatic actor.
I also recently saw HARRY BROWN, which is kind of like Michael Caine's TAKEN movie. It's harsh and the representations of the young English thugs here are repugnant and make the CLOCKWORK ORANGE fellas look like kiddie party clowns. Caine is usually a solid, likable actor and this is a fun twist on the vigilante genre. "DIRTY" HARRY BROWN is more like it...
As for the Australian independent film ANIMAL KINGDOM, I had heard a recommendation for this one. One guy said it was the best film to come out in 2010 and it should've won the Oscar. While I'm not sure it's on that level, I do think it's a very good and interesting film (which is rare these days), especially given the lack of compelling features last year. It's definitely a movie that's not jockeying for an Academy Award, it's just a good movie with something to say. I'd definitely vote for this one over TOY STORY 3! (Apples and oranges, of course).
In an age of remakes, reboots, requels, rehashes and redundancies, it's nice to discover some good, original movies every once in a while.
Posted by Greenblatt the Great! at 8:31 AM