Dave, will you Murray me? (Happy b-day, Letterman!) 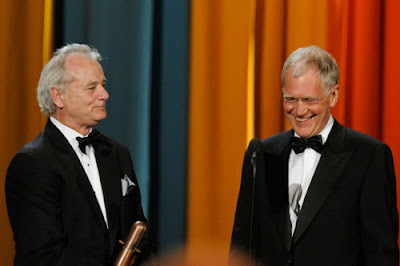 Here is Bill Murray with honoree David Letterman in front of Johnny Carson's curtains. This was the scene over the weekend on the Comedy Central Awards, where they honored Letterman with the first ever Comedy Central Icon Award for Comedy. It was fun to see Murray joke around with Letterman, two old friends. Recall that whenever Letterman has a first episode, Murray is there like a lucky rabbit's foot.
Bill Murray's latter-day career to me is more interesting than the early days on SNL, "Stripes," and "Ghostbusters." Those things were fun but disposable. I'm a very big fan of his work with Wes Anderson, including "Rushmore" and "The Life Aquatic," I enjoyed "Lost in Translation" when I saw it, and even more so, I've seen Jim Jarmusch's "Broken Flowers" twice (yes, twice!!!). He's the best things about the uneven "Coffee & Cigarettes" and a highlight of "Zombieland." Remember "Ed Wood"? I think his renaissance officially began with "Groundhog Day," a wry comedy Harold Ramis has never been able to top since. (Poor bastard!)
Today happens to be David Letterman's birthday. Letterman, in my opinion, deserves the icon award. He is a true master, perhaps one of the sharpest comic minds ever, even though I admit I haven't seen much of his show in recent years because the talk show formula grates on me these days (plus, I'm distracted by reruns of "Curb"). But Letterman, in my estimation, is the true heir apparent of Johnny Carson, despite ratings, hype, and multiple re-launchings of Leno and Conan.
Let's be honest, folks! Joan, can we talk?! Conan jumped the shark after the first time Andy Richter left the show...which was in the last century....and the funniest thing on his show was a puppet of a dog with a cigar. Triumph is a true genius. Conan alone, without Andy, was too much Conan. And now that Andy is back on the show, it's too much Conan and Andy. Something went awry....
Leno....man, I've seen less irritating pelican faces at Pismo Beach....He is grating beyond belief and his writers supply him with an endless supply of comfort food jokes that only your great-grandparents would chuckle over (if only their hearing aids were turned on). Leno is the Jeff Zucker of comedians...and he should follow Zucker into obscurity.
Nobody really talks about Fallon or the other guy much. I don't even know if Jimmy Kimmel is still on the air (his ex-girlfriend is 12 times funnier than he is...unless you belong to a frat!).
Meanwhile, the funniest punchline in all of late night is that Carson Daly is quietly becoming a billionaire in the dead hour zone. Bow down to your master, General Daly, Emperor of NBC!
Posted by Greenblatt the Great! at 10:10 AM

I have a soft spot for CRAIG FERGUSSON. (is the the "other guy")