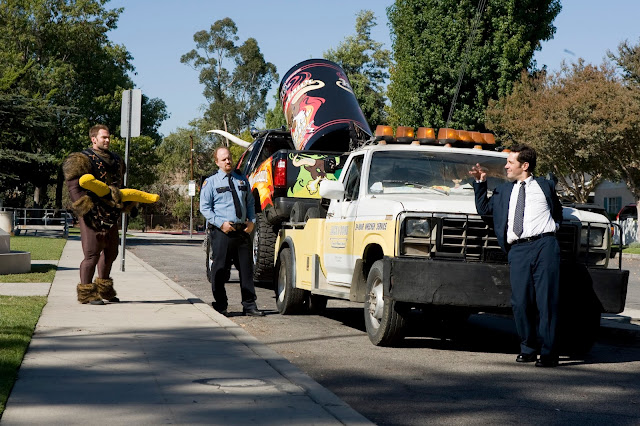 Thanks to the giant success of Marvel’s “Ant-Man,” Paul Rudd has suddenly shot into the superstardom stratosphere. But roll back eight years ago, and the wiry, Chardonnay dry-witted actor—best known for comedies such as “I Love You, Man” and the “Anchorman” movies—was just a hop, skip and a meltdown away from Pacific Palisades, filming a little comedy called “Role Models,” co-starring Seann William Scott and Louie C.K., on the streets of Santa Monica and Venice.
David Wain, the movie’s director, has a long-running personal and professional history with Rudd and fellow actor/writer Ken Marino, both of whom co-wrote the “Role Models” screenplay with him. Wain produced (and almost directed) Marino’s festival-circuit indie drama, “Diggers,” which co-starred Rudd; and he directed Rudd in the 2001 coming-of-age feature film spoof “Wet Hot American Summer.” Tooday, a long-in-gestation prequel, “Wet Hot
American Summer: First Day of Camp,” debuts on Netflix. 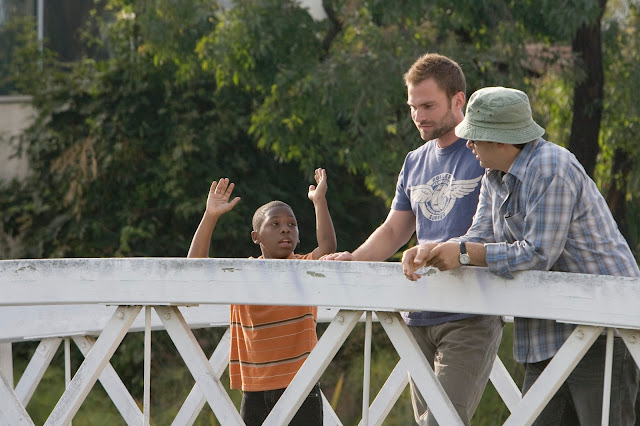 Bred on the comedy of Woody Allen, Harold Ramis, Cameron Crowe and Blake Edwards, Wain, a recently transplanted New Yorker, was hired by Universal Studios seven years ago to lens something called  “Little Big Men” only six weeks before production began. This had Wain, Rudd and Marino furiously re-working the screenplay —previously converted from a drama to a broad comedy by Timothy Dowling—as shooting was about to begin.
“This was my first big budget studio film. So it was kind of intimidating,” Wain told the Palisadian-Post.  “But when we started the shoot itself, we really got into it.”
The feature film was originally written to take place everywhere but “I thought, ‘Let’s not go generic, let’s get some real quality,’” Wain continued. “The Westside is a cool, interesting, photogenic place.”
Re-titled “Role Models,” the comedy starred Rudd and Scott as Danny and Wheeler, respectively; ne’er-do-wells stuck in brain-dead jobs as energy drink pitch men (Wheeler’s mantra to Danny before embarking on their soul-crushing work: “Game face!”) who, after Danny’s public meltdown at an elementary school, get sentenced to the community service punishment of participating in the Big Brother-esque mentorship program Sturdy Wings, run by reformed coke addict Sweeny (Jane Lynch). Matched with their “Littles” — medieval live-action, role-playing freak Augie (Christopher Mintz-Plasse) and foul-mouthed African-American kid Ronnie (Bobb’e J. Thompson) —“Bigs” Danny and Wheeler embark on what at first appears to be the mentoring journey from hell.
But the cynical duo and their Littles eventually warm up to each other: Wheeler and Ronnie bond over big breasts and the rock band KISS while Danny realizes how important the “Lord of the Rings”-style re-enactment game LAIRE is to Augie. The Bigs wind up learning life lessons from their
ostensibly unsalvageable Littles. 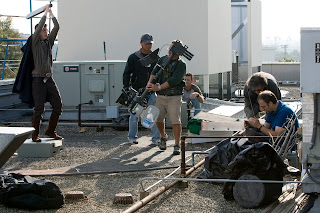 Rounding out the proceedings: excellent performances by Elizabeth Banks as Danny’s attorney girlfriend Beth, Ken Jeong as LARP ruler King Argotron and Marino as Augie’s step-father; plus a who’s who of Wain’s comedic comrades from the 1993 MTV satirical show “The State.”
Despite shooting vituperative scenes with underage kids (including a running off-color joke featuring Palisadian Ben Affleck as a punchline), Wain said there was no resistance from studio executives regarding the movie’s raw humor.
“Judd Apatow’s stuff was very popular at the time,” Wain said of the former Palisadian. 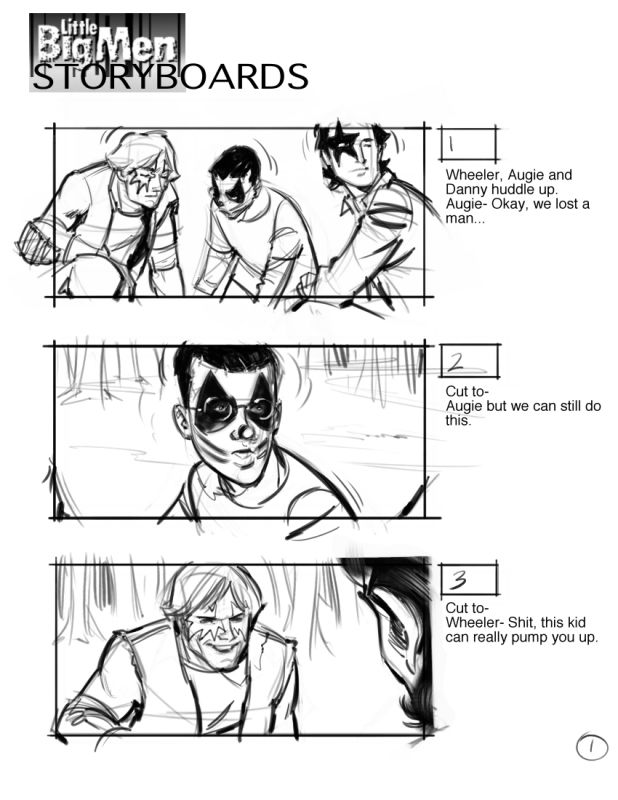 Shot Just Down the Hill
Aside from a third act shot at the Disney Ranch in Santa Clarita and South Pasadena’s Kaldi Coffee and Tea (“We took a private shop that was a little more hipster and turned it into a Starbucks,” Wain said, chuckling), the first two-thirds of “Role Models” were almost entirely shot just down Pacific Coast Highway in Venice and Santa Monica.
The Venice Canals’ 2419 Strongess Avenue doubled as Wheeler’s bachelor pad. Meanwhile, two Venice addresses served as the Littles’ family homes: 822 Valetia (Augie’s house) and 3111 Stanford (Ronnie’s).
Then there’s the shindig where Wheeler, distracted by a sex-crazed schoolteacher, loses Ronnie.
“The party scene was filmed on Venice Beach,” Wain said. “That was a really fun night on the beach.”
Amazingly, the Venice Canals were new to Wain: “I had never seen these Canals before. I remember walking those canals and the location people were ‘Uy-yoy-yoy! So expensive…’”
Permits cost more to shoot there and it was not as filming friendly or even hospitable as other neighborhoods. However, “you can get something a little different,” he said.
Besides, the Canals fit Wheeler’s oft-vapid personality.
“He has a slightly surfer mentality,” Wain said of Scott’s character.
Sure, Scott had cut his teeth doing comedy (“American Pie,” “Dude, Where’s My Car?”) but “it was a different style. Paul likes to improvise. Paul and Seann are very different. That was built into the characters’ [dynamics].”
The high school appearing at the start of “Role Models” is El Segundo High School, the same school used two years previously for the hit Apatow comedy “Superbad” (the very film that made Mintz-Plasse—as McLovin—a breakout star), which was used for the auditorium and hallway scenes. The more audacious exterior stuff with the Minotaur truck, the towing guy and the security guard (played by Louis C.K.) was shot in Studio City at Walter Reed Middle School.
“He was not a star at the time,” Wain noted of C.K. “He was mostly known as a TV actor. His stand-up was just starting to get notoriety. This was long before his FX show.”
On Sept. 21, 2007, Wain shot the scene in which Sweeny shows up just as Ronnie commandeers the SUV, locking out Wheeler and driving in circles at Eddie Junior’s Market and Liquor at 825 Pico Boulevard. That part might as well have been an action movie shoot, said the director.
“For me it was! We had cameras up in the air,” Wain recalled. “They altered the sign. These days, they would never change a sign.”
The Sturdy Wings scenes were filmed at Venice Boys and Girls Club on Lincoln and Venice Boulevards.
“When we saw it, I knew it was perfect,” Wain said. “There are a lot of boys and girls activities happening during the shoot.”
The Club’s activities continued unabated as certain areas were blocked off for the production, which demanded several classrooms just for the movie people to keep their gear.
“We had a huge crew of 200 people: lights, catering, extras,” recalled Wain, for whom this was the biggest-budgeted, most mainstream film he had ever undertaken.
As for the running motif stemming from Wheeler’s KISS infatuation, “that was primarily my push. Craig Wedren [the “Role Models” score’s composer] and I in college had our walls plastered in KISS posters,” Wain said of their New York University days.
“Role Models” (its third title) was originally developed as a drama.
“[Screenwriter] Tim Dowling came in before I was even involved,” Wain said. “I wasn’t hired to direct it until six weeks before the shoot.”
It was Dowling who had re-written it as a comedy.
“He created the broad strokes. He turned the story from one parent with a kid to two guys and two kids,” Wain said. “Ken and I worked as a team. We basically sit at the computer and type it up.”
The script overhaul by Wain’s team was extensive enough to land Wain, Marino and Rudd writing credits. “Then came [the Writers Guild of America strike running from November 5, 2007 to February 12, 2008] and we had to stop writing,” he said. From that point on, they were forced to shoot the script they had, which luckily was evolved to Wain’s satisfaction. Post-strike, Wain shot a few pick-up shots.
Ultimately, the Universal comedy turned a tidy profit following its November 2008 release. For a film based on a $28-million budget, grossing $92 million in theaters worldwide plus an additional $40 million in DVD revenue achieved the goal of making at least triple the budget to qualify as successful.

Wain’s World
Today, “Wet Hot American Summer: First Day of Camp” reunites Wain with co-writer Michael Showalter and a formidable cast who were barely rising stars when the 2001 original was released, including Rudd, Amy Poehler, Bradley Cooper and Banks. Things have certainly changed career-wise for everyone since that first trek to Camp Firewood circa 1981: the location of the new movie says it all. While the original was done on a shoestring in the Poconos in Pennsylvania, this prequel was shot, as Wain put it, “in the wilds of Malibu.”
“There’s definitely a big reunion flavor. It was a total blast. In some ways, it felt similar,” said Wain, who added that this project has long been in everyone’s thoughts. “We’ve been thinking about it for years and years, regarding reuniting the actors, many of whom [Cooper, Poehler] have since shot to superstardom.” This prequel included everyone’s participation by no less than “a sheer force of will. We wanted to do it. The cast wanted to do it. Finally, the stars aligned our scheduling.”
It’s easy to see why a “Wet Hot” follow-up took so long. Not only did the original’s actors go on to star in projects such as “American Sniper,” “Parks and Recreation” and “Ant-Man,” Wain’s “Children’s Hospital” series (featuring Marino) just completed its sixth season on Cartoon Network’s Adult Swim. On June 23, Wain debuted a new Comedy Central series, "Another Period,” a jokey historical satire starring Wain, Michael Ian Black, Christina Hendricks and Jason Ritter which follows the lives of the obscenely rich Bellacourt family and their many servants in turn-of-the-century Rhode Island.
And now comes “First Day of Camp.”
Yet after all that water has passed under the Canals’ bridges, Wain admits he’s very interested in revisiting “Role Models” in a sequel; maybe even a spin-off involving LAIRE.
“Sure. I loved ‘Role Models,’” Wain said. “We have talked about it. We just haven’t gotten around to it.”
Given the 14-year wait between “Wet Hot American Summer” movies, we should be officially halfway to watching
“Role Models 2” in 2022. Game face, Westside! 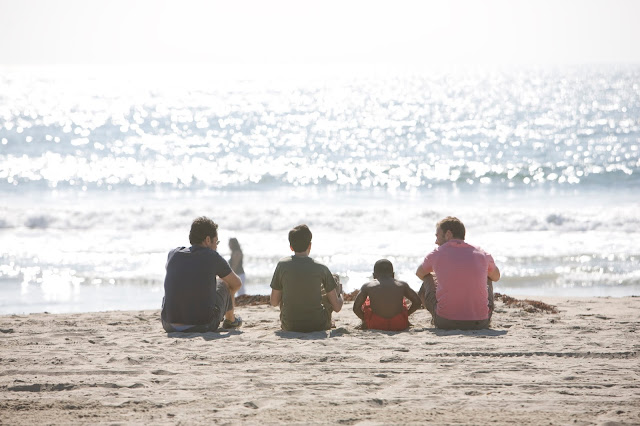