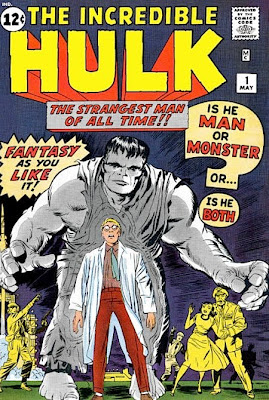 When I was a kid, THE INCREDIBLE HULK was my favorite comic book (even surpassing AMAZING SPIDER-MAN for a spell) because I was also a big fan of the CBS TV drama. In fact, I wrote Lou Ferrigno as a kid in Brooklyn, NY, and he sent me back a black and white autographed photo of him Hulking out behind Bill Bixby. I still have that photo, as well as the envelope, which had a drawing of him on the letterhead, sent from Lou Ferrigno Studios in exotic Santa Monica (little did I know that one day I would live in the area, as I do now).

Above is the great Jack "King" Kirby cover to # 1, with commentary here by letterer Todd Klein on the logo, as posted on The Beat: http://www.comicsbeat.com/2010/06/25/todd-klein-studies-the-hulk-logo/

It's hard to believe now that this initial run of THE INCREDIBLE HULK, drawn by Jack Kirby and, at the end, Steve Ditko (the future team behind MACHINE MAN -- ha!) only lasted 6 issues!
Posted by Greenblatt the Great! at 10:36 AM