Well, then, where is Lady Goo Goo? 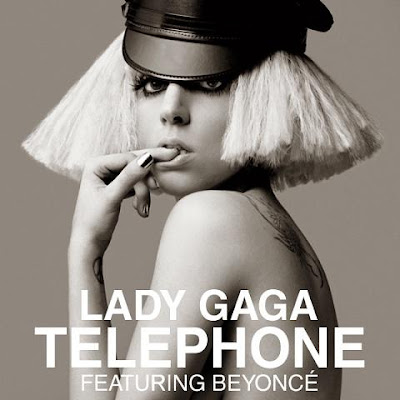 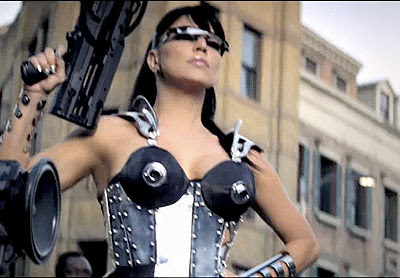 File this under GP for "guilty pleasure" department.

Maybe I'm weakening but I don't think Lady Gaga is that bad, and the Black Eyed Peas have somehow improved over time.

The comparisons to Madonna are inevitable: a chameleonic Italian-America (fake) blonde who pumps out disposable dance-centric pop hits. Yet compared to a lot of the pop on the radio, Lady Gaga is looking original right about now. I can't say I love her songs or I'll run out and buy them, but I enjoy her campy videos, particularly "Paparazzi" and the new one, "Telephone," co-starring Beyonce (who STILL can't act....even in a video where her acting is supposed to be stilted!) But like Madonna, Lady Gaga risks overexposure....in the last couple of days alone, there was that recent Barbara Walters interview (oof!), I saw her interviewed a few times on Fuse, and she was on last night on Larry King (ridiculous!), on which she wore yang (black suspenders on white shirt) to Larry's yin (white suspenders on black shirt). What the hell?!?! I already know her whole life story shtick , how she got her nickname from Queen's RADIO GAGA song ("All I hear/is Radio Gaga/Radio Goo-Goo/Radio Gaga"), how she grew up on Bruce Springsteen and she calls her fans her monsters. She should now hide out for a while before she winds up being interviewed by Space Ghost on Cartoon Network.

Onto BEP: I guess it's this new album of theirs, but their tunes have finally hooked me in (even though by now these tunes have been overplayed on the radio). I enjoyed BOOM BOOM POW and I GOTTA FEELING when they came out, and now I'm digging IMMA BE and ROCKIN THAT BODY (and the accompanying adjacent videos sci-fi epic, with the gotta dance stun guns and the break-dancing robots). They're kind of like the Spice Girls. Their hooks on these songs are pretty infectious, and they've come a long way from those lame, dreadful early hits like WHERE IS THE LOVE and LET'S GET IT STARTED, which I could not stand (and still can't!). Maybe this new album should have been their first. We can reboot movies so why not the BEP?

Anyway, I'm not going to fall on the sword defending these acts at length but at least the stuff is kind of fun. The haters will say that these acts suck, and they can make their case. But you know what really sucks? What Jay-Z calls rap these days (moribund-sounding stuff like DOA and FOREVER YOUNG), or all that mid-tempo auto-tune T-Pain rip-off rap of a couple years ago. THAT is painful! 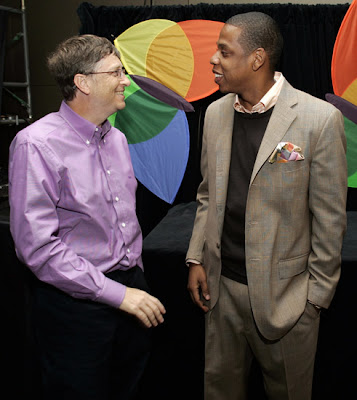 Posted by Greenblatt the Great! at 6:17 AM