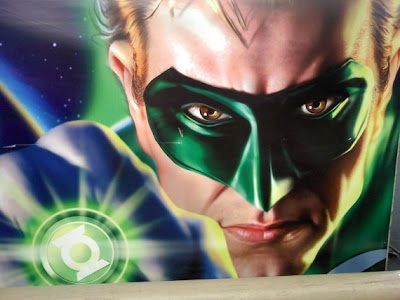 Next year will see the coming of two superhero movies: THE GREEN HORNET (Jan.) and THE GREEN LANTERN (July). Try not to get the two mixed up. Above is some artwork that leaked onto the Net from WB studios featuring Ryan Reynolds as the Green Lantern.

Here's the trailer for GREEN HORNET, which looks more like a sequel to THE SPIRIT. In my opinion, it looks pretty dreadful. Not only is Seth Rogen obviously miscast but so is apparently the director, arthouse filmmaker Michael Gondry.

At least the makers of GREEN HORNET had the good sense to move the film's release date away from Christmas where, two years ago, another anachronistic crimefighter in a domino mask bombed miserably: THE SPIRIT. (So at least now GREEN HORNET has a chance of distinguishing itself from that movie by bombing in the following month).
Posted by Greenblatt the Great! at 3:12 PM