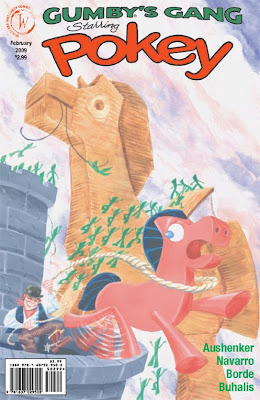 The long-delayed GUMBY'S GANG STARRING POKEY comic book I wrote with my buddy Rafael Navarro providing the sublime art is finally making its debut in three weeks at San Diego Comic-Con. It's a real gem. You're gonna love it, and GOO and PRICKLE will follow next year. THE BLOCKHEADS will also be spotlighted in the GUMBY'S GANG series.

WildCard Ink publisher Mel Smith and editor Paul Birch have been very involved in overseeing the GUMBY'S GANG series, and POKEY will be a spectacular launch of this new full-color, all-ages series. (That's the old version of the cover up above, the new one is even more spectacular!) We've taken great care with the GUMBY'S GANG series to go back to the source material -- the original Gumby series from the 1950s and '60s that sealed Art Clokey's legend -- to give this series some street cred with Gumby fans.

A few hints about the POKEY book: it's a time-travel yarn (like, duh! It's all over the cover!) and Gumby has a good amount of screen time, as does some of the supporting cast members, including a certain befuddled professor you'll recall from the original Gumby shorts.

Look for me and publisher Mel Smith causing mayhem and bedlam signing up POKEY at the WildCard Ink/Gumby Comics table in Small Press during San Diego Comic-Con in a few weeks. Raf Navarro will be at the convention as well and he'll no doubt show up to push the POKEY as well. Otherwise, he'll be selling his action-packed SONAMBULO comics from the Atomic Basement booth.

See you down in sunny Sandy Eggo!
Posted by Greenblatt the Great! at 12:14 AM

Excellent! Cannot wait for a copy. That Navarro cover is out of the park! Congrats Mikey, this looks like a winner. You got your mits on one of America's true treasures, Gumby and Pokey!

I love comics , after meeting the publisher Mel Smith , I was quickly let down , he smelled like marijuana and starting acting really weird around my children, I felt very uncomfortable with the way he was acting tords my kids , becareful around this guy ....a real weirdo with a drug habit.