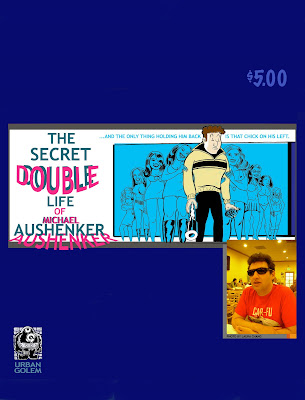 THE SECRET DOUBLE LIFE OF MICHAEL AUSHENKER is now available as its own digital book at Wowio.Com. Here's exactly where to go to download it.

This is my autobio debut: part glimpse into my process as a cartoonist, and part-espionage thriller. It's also the book that my girlfriend does not want you to read because it is so scandalous, violent, controversial and out of control. (I now have to wear a SCRAM on my ankle so she knows where I am at all times.) On the plus side, I think I drew Laura rather well and she looks cute as a button. There's a preview of a couple of pages from the book at the listing where you can judge for yourself.

Please note: other than the cover, this is the same story that appeared as a back-up feature in last year's CARTOON FLOPHOUSE FEATURING GREENBLATT THE GREAT! #2. No additional material.
Posted by Greenblatt the Great! at 6:18 AM