One more shot of Kirby to get the week going... 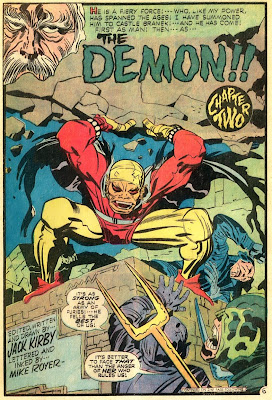 Jack Kirby (like Steve Ditko, fellow industry groundbreaker) has as many fans as he does detractors. How can that be? What gives? Was he a genius or glorified hack?
I don't begrudge those who don't dig the Ditko or Kirby because these prolific stylists did a lot of brilliant work and a lot of not-so-brilliant work. The latter is understandable as they were basically in a business where they had to dance for their dinner (for not a whole lot of shekels) and create a ton of work on very short deadlines. They didn't exactly work comfortably, with the luxury of a fat paycheck to poop out a book whenever they felt like it as Darwin Cooke or David Mazzucchelli might these days. It was just a different age. Ironic how those who have enjoyed entire careers benefitting from (and "paying homage to") these masters have made so much more money than the pioneers themselves. Whatever.
It's mind-boggling to think of the amount of titles Jack Kirby was juggling at once while at DC in the early 1970s. They included tremendously detailed work in SUPERMAN'S PAL JIMMY OLSEN, NEW GODS, OMAC, KAMANDI, MISTER MIRACLE and plenty of fleeting flirtations with failed titles (such as SANDMAN, JUSTICE INC., MANHUNTER, and RICHARD DRAGON, KUNG-FU FIGHTER. While KAMANDI was pure eye-candy set in a PLANET OF THE APES-post-apocalyptic world, my personal favorite of his DC work was THE DEMON, a moody little occultish title that self-contained and not a dense, ongoing saga like JIMMY OLSEN or NEW GODS. 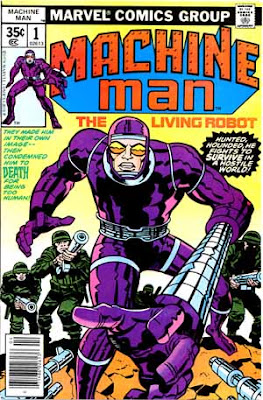 Following DC, Kirby hit Marvel in the mid-to-late 70s, where he returned to CAPTAIN AMERICA, took over BLACK PANTHER, drew DEVIL DINOSAUR, tried but failed to launch a book based on THE PRISONER TV series, and even executed an INVADERS cover or two. During this period, I preferred above all his output his MACHINE MAN, he wrote and drew before handing over the book to Ditko. It was a spin-off from his take on Kubrick's 2001: A SPACE ODYSSEY that outlasted and outshined the source title. MACHINE MAN might be one of the best Marvel B-titles of the 70s: I would put this one on the top shelf alongside THE HUMAN FLY, THE INVADERS, WEREWOLF BY NIGHT, GHOST RIDER, BROTHER VOODOO, SON OF SATAN and MARVEL TWO-IN-ONE.
Posted by Greenblatt the Great! at 9:44 AM

Your point about Kirby having to crank out books to get paid by the pound is worth noting. As you mentioned, not everything is going to gold, but much of the stuff he 'cranked' out was visually stunning, with imaginative concepts flying out of his brain at rapid pace, this being repeated on maybe 3 or 4 books a month for years at a stretch!!

Combined with the fact that he was basically working on 'kids books', it's now wonder some can easily dismiss his output as 'hackwork'.

But as you mentioned, some of today's top creators (and I'm not dismissing anyone's work) have the opportunity now to work on one book or miniseries a year. Today's work is supposed to be more labored over, more 'literary'. So that makes the work more mature and artistic and whatever other words people want to ascribe to 'graphic novels'. But how many of them could crank out several books a month for years and come up with the type of treasure trove Kirby left?

Again, it's all personal taste. And I know how I like my comics cooked!

P.S.: I actually think that the entire MACHINE MAN run has a unique feel to it in that half the series is done by Kirby which is followed up by Steve Ditko (with writer Marv Wolfman) finishing off the second half. That's two different takes on the same Kirby character by my two favorite creators. That's an Omnibus waiting to happen!

Prior to MACHINE MAN, didn't the last time Kirby/Ditko divied up a series was the short-lived six issue original INCREDIBLE HULK run? But I think Dikto inked some Kirby and only drew # 6, correct?

You're right....Something like Cooke's Parker series, which I'm reading with half-interest (because I love the novels they're based on) is kind of a precious project, putting it out once every 2 years at his leisure. Kirby and Ditko were working cartoonists, doing it to survive and, in Kirby's case, feed a family. It was like Kirby was a construction worker hitting the asphalt every morning at 6 am and coming home grungy and tired in the evenings. Heavy lifting.

People judge some of Kirby's stuff too hard because his great imagination has put that genius burden on him---and deservingly so --- but often Kirby was overworked and stretched very thin. Given that he was such a workhorse, it's mind-staggering how inventive he was! Others would probably dry out really quickly!

Have you seen this MANHUNTER, Javy?