I'm not exactly itching for a TINTIN trilogy of motion-capture, live/animated films. Tintin has been adapted to movies before in Europe and the results appear ridiculous. In general, I don't get very excited anymore when something I really enjoy in one medium is translated into another. Usually, I brace myself for disappointment, as it's hard for a movie to measure up to a book or comic.
But I suppose that with Steven Spielberg and Peter Jackson, masters of young adult fantasy, acting as custodians of Herge's creations, it should be in pretty good hands. And from all appearances, so far, it is.
Below are some of the first images surfacing online of the first Tintin movie, SECRET OF THE UNICORN, and the style seems to fit the Tintin aesthetic (thankfully, it doesn't resemble POLAR EXPRESS too much). Bravo, gentlemen! I'm looking forward to seeing the trailer based on these stills. 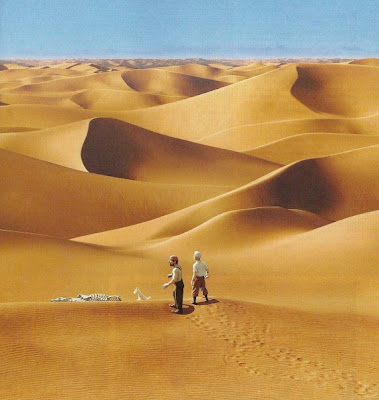 P.S. -- It'll be hard to say how a European-embraced property such as Tintin will fare at the U.S. box office, but it should be interesting seeing how the film's marketeers and talent go about educating Americans on the phenomenon of Tintin, a character as old as Popeye the Sailor! (circa 1929)
Posted by Greenblatt the Great! at 9:18 AM