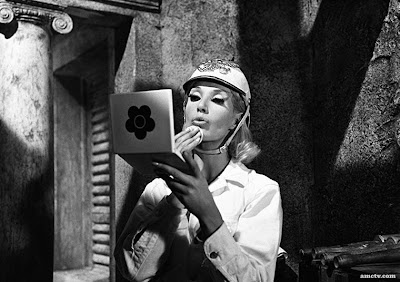 Just for the hell of it, I rented a DVD with a couple of episodes of THE PRISONER, one of my favorite shows. There's no better program for late-night viewing. This show was meant for, like, 3 a.m. The episodes I saw again were two of the better ones:  "The Woman Who Was Death" and "Once Upon A Time." 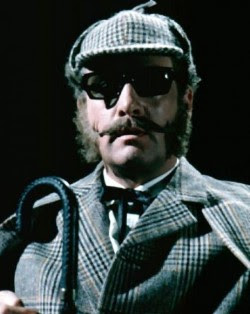 Like Warren Oates, another all-time favorite actor of mine, Patrick MacGoohan never got the monster fame and appreciation as many lesser actors have. But maybe that's for the best....
Oates and MacGoohan, they did their thing and they did it well. They were the kind of actors you discover, not the kind of actors that are shoved down your throat with marketing and hype. They were serious about their craft and they seemed reasonably humble.
If Warren Oates had gotten too big, he might have become a flaccid self-caricature like Jack Nicholson, who started out great and got lazier with success. If Patrick MacGoohan had blown up, perhaps he would've turned into a crusty curmudgeon like Sean Connery, romancing women on screen young enough to be his granddaughter.
Perhaps it's sad that neither Oates nor MacGoohan became these epic leading men with a huge body of work. The trade off is that they did some stellar work that froze them in time while they were in their prime. They were the Beatles, burning out early with a finite yet terrific body of work, instead of becoming the Rolling Stones and continuing on and on and on for years and years well past their prime. I rather listen to the "White Album' over 'Steel Wheels' any day! :)
Posted by Greenblatt the Great! at 12:20 AM